Bahrain F1 is an ‘annual reminder’ of tyranny and repression

‘Formula One have abandoned their commitment to freedom of expression’ 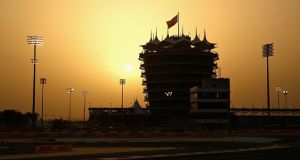 In 2017, Najah Yusuf backed the calls for “freedom for Formula detainees”. She says she never thought she would become one of them. Photograph: Getty Images

Najah Yusuf is serving a three-year prison sentence in Bahrain, for defaming the state, hurting its interests and distorting the image of the kingdom abroad.

I am a civil servant from Bahrain. I write from Isa Town prison, 22km away from the Bahrain International Circuit, which hosts Formula One’s annual grand prix. This weekend, fans of Formula One will flood into Bahrain, brimming with anticipation for this year’s race. The grand prix is an international sporting spectacle and a symbol of wealth and glamour, particularly for Bahrain’s ruling family.

However, for me and my fellow Bahraini citizens, it is nothing but an annual reminder of our suffering in our fight against tyranny and repression.

Just 4km away from the airport where many excited fans will arrive is Muharraq police station, home to Bahrain’s notorious National Security Agency (NSA). In April 2017, a week after Sebastian Vettel took to the podium to celebrate his victory in the Bahrain Grand Prix, the most horrific experience of my life began.

For four days, I was relentlessly interrogated because of Facebook posts, including those that called for the race to be cancelled and for the release of others imprisoned for criticising Formula One. I was lured to the Muharraq police station, under the pretence of signing a statement on behalf of my son.

When I arrived, the questions began. They forcibly took my phone away from me, threatening to kill my son when I refused to unlock it. They asked me about my relationships with various human rights defenders, activists and opposition groups.

They threatened to kill me, they tried to bribe me, they beat me. But worst of all, officers tore off my hijab and attempted to strip me of my clothes, before an officer sexually assaulted me in custody. The pain and humiliation of that week will haunt me for the rest of my life. All this because I took a stand against state repression and the Grand Prix.

On the fifth day, I could take it no more. I was physically, mentally and emotionally exhausted. I wanted it to end. Officers presented me with a prepared confession to sign. While I was reading it, the officers beat me again and threatened to rape me. So I signed it.

In this emotionally traumatised condition I found myself in front of a public prosecutor, who had no interest in my ordeal. Without the presence of a lawyer, I, again, signed the prepared confession presented to me.

A year later, I was convicted and sentenced to three years imprisonment. My court ruling states that I was guilty of defaming the state, hurting its interests and distorting the image of the kingdom abroad. As evidence of my supposed crimes, the judge cited a Facebook post criticising Formula One. In Bahrain, this is considered a threat to national security.

What hurt me the most when the sentence was passed was not only the feeling of injustice, but the judge’s acceptance of the testimony of an NSA officer who witnessed the abuses during my interrogation. At that point it became clear that the Bahraini justice system is not only corrupt, but allows its officers to torture and violate citizens with total impunity.

Since I arrived at Isa Town prison, my suffering has only continued. Prison authorities regularly discriminate against me on account of my status as a political prisoner. Last September, my cellmate and fellow political prisoner Hajer Mansoor was hospitalised following an assault by prison guards. An early day motion in the British parliament identified this assault as being led by the head of Isa Town prison, Lieutenant Colonel Mariam Albardoli. This occurred days after Hajer Mansoor’s son-in-law, Sayed Alwadaei, briefed MPs about our cases. We were subsequently cited by an MP in the British parliament, along with our cellmate Medina Ali.

Since then, all inmates have been punished collectively because I had the temerity to speak out, with restrictions on our family visits, phone calls and time outside the cell. The prison authorities want to silence us, but we will not stop protesting at the appalling conditions at Isa Town prison, which were recently condemned by the UN.

I am a mother of four, but I have not seen my children for the past six months. The same punishment has been inflicted on my cellmates, Hajer and Medina. The situation breaks my heart, but I count myself lucky compared to others.

The five children of activist Salah Abbas will never see their father again, as he was killed during protests on the eve of the 2012 Grand Prix. That same year, a 22-year-old photojournalist Ahmed Ismail Hassan who was covering protests against the race was also killed. Police have regularly crushed peaceful protests with violence over the years.

Although I am still paying for my decision to take a stand against the grand prix, my stance has not changed. For years, the ruling family has used the race to clean up its international reputation and whitewash its disregard for human rights. During this period, Formula One has consistently ignored the abuses that occur.

In 2017, I backed the calls for “freedom for Formula detainees”. I never thought I would become one of them. Every moment I spend in prison stains the reputation of Formula One, who have abandoned their commitment to freedom of expression and allowed injustice to be perpetrated in their name.

Despite the fervour of excitement, I implore all fans of Formula One to remember my story and the suffering of thousands of Bahraini citizens. Don’t allow the race to be stained by Bahrain’s human rights abuses.