Calls for F1 to investigate abuse of Bahrain protestors 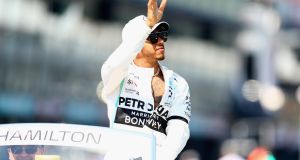 Lewis Hamilton of Mercedes GP on the drivers parade before the F1 Grand Prix of Australia at Melbourne Grand Prix Circuit a fortnight ago. Photo: Mark Thompson/Getty Images

Human rights groups are demanding the cancellation of Sunday’s Bahrain Grand Prix if Formula One is not allowed to investigate the abuse and imprisonment of activist Najah Yusuf.

Campaigners also warned they would escalate their protest by demanding all drivers – and world champion Lewis Hamilton in particular – should address the matter of protestors being jailed for criticising the race and regime.

Yusuf was imprisoned in 2017 for three years after posting criticism of the race and the regime on Facebook. She details in a column for the Guardian the threats and sexual assault to which she claims she was subjected before being coerced into signing a pre-written confession and jailed in June last year. She writes: “Every moment I spend in prison stains the reputation of Formula One who have abandoned their commitment to freedom of expression and allowed injustice to be perpetrated in their name.”

Lord Scriven, who has been active on Yusuf’s behalf for Human Rights Watch, has been assured by Sacha Woodward-Hill, the general counsel to F1, that the sport will conduct an independent investigation into her case. The Liberal Democrat peer was unequivocal that F1 should be held accountable if the sport fails to honour its commitment to the protesters.

“If F1 does not act we have to speak to people like Lewis Hamilton,” he said. “We have to look him in the eyes and say: ‘Lewis, is it appropriate to earn millions of pounds and stand on a podium that could be on the back of Najah? Less than 24km away somebody is in prison being abused. You, Lewis, have a moral responsibility if your leadership will not take it.’

“You cannot win world titles on the back of human rights abuses and stand in countries that abuse people without realising you have a moral responsibility.”

Yusuf’s case is the latest in a string of accusations of imprisonment and abuse surrounding the Bahrain GP. In 2011, it was cancelled after mass human rights protests in the Gulf state. A year later the race went ahead despite tens of thousands of anti-government protesters flooding a highway to demand its cancellation. It has remained a volatile event ever since.

On Wednesday Human Rights Watch and the London-based Bahrain Institute for Rights and Democracy were among 15 signatories to a letter sent to the FIA president, Jean Todt, demanding Yusuf’s immediate release.

Scriven insisted the race should be cancelled if F1 is prevented from looking into Yusuf’s case. “They should be allowed in with a lawyer to ask Najah questions as part of their investigation,” he said.

“If the government denies that, it should be enough for F1 to say: ‘We are not racing on Sunday.’ We are talking about systematic human rights abuses around F1 that have been going on predominantly since 2012. It is not acceptable a sport can continue to do this. If the authorities say ‘no’, F1 should not go ahead with the race. The Bahrain authorities need to know this is not a game. This is individuals’ lives.”

In 2015 F1 adopted a commitment to respecting human rights in its operations globally. A spokesperson said on Wednesday said there were no plans to visit Yusuf in prison. A statement read: “We are somewhat surprised that campaigners are making public demands of Formula 1 to visit Ms Yousif. In recent discussions with campaigners these demands were never raised, indeed they were supportive of private actions and next steps we are taking, that we outlined to them when we met.

“Furthermore campaigners accepted our offer to keep some of the actions we were taking private, as they had raised concerns about any public dialogue. We all agreed it would be unhelpful to comment further publicly at this time. We’ve kept to those commitments, in line with our commitments to respecting internationally-recognised human rights everywhere, and engaging with promoters to ensure nobody faces punitive action over freedom of expression.”

A statement for the Bahrain regime this month said Yusuf had been convicted of “terror offences” unrelated to the grand prix yet noted the mother of four had written: “No to Formula races on occupied Bahraini land,” and that F1 in Bahrain was “nothing more than a way for the [ruling]al-Khalifa family to whitewash their criminal record and gross human rights violations”.

“I was surprised they had asked no one apart from the Bahrainian government what had happened,” Scriven said. “That is like asking only the perpetrator of domestic violence – even though there are other witnesses – to give assurances it didn’t happen. It is nonsense.” Bahraini government, meanwhile, insists no one is detained for expressing political views.

The letter to Todt emphasises why human rights organisations are demanding action. It read: “The Bahraini government uses such events, and the lack of global concern about such abuses, to sanitise, or sports-wash, its image abroad while continuing to abuse its citizens domestically.”

Mercedes, Hamilton’s team, said in a statement: “As a competitor in Formula One, Mercedes-Benz Grand Prix Limited is contractually obliged to take part in all rounds of the Formula One World Championship, according to the calendar established by the FIA and the commercial rights holder.” – Guardian