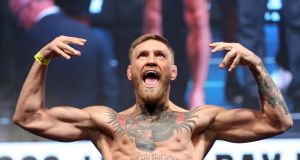 Conor McGregor has hinted that he is ready to reverse his retirement from mixed martial arts after tweeting: “see you in the Octagon”. It comes ten days after saying he would retire.

The former two-weight UFC champion provoked shock — and scepticism in some quarters — when he last week announced on March 26th that he was bowing out of the sport.

But McGregor, who has come in for criticism over controversial tweets aimed at bitter rival and UFC lightweight champion Khabib Nurmagomedov since then, seems set to perform a dramatic u-turn.

He wrote on Twitter: “I want to move forward, with my fans of all faiths and all backgrounds. All faiths challenge us to be our best selves. It is one world and one for all.

I want to move forward, with my fans of all faiths and all backgrounds.
All faiths challenge us to be our best selves.
It is one world and one for all ❤️
Now see you in the Octagon.

Hey guys quick announcement, I’ve decided to retire from the sport formally known as “Mixed Martial Art” today.
I wish all my old colleagues well going forward in competition.
I now join my former partners on this venture, already in retirement.
Proper Pina Coladas on me fellas!

“Now see you in the Octagon.”

McGregor and Nurmagomedov have a much storied past — the pair are both still suspended from competing following the notorious melee in the aftermath of the Russian’s win over the Crumlin native at UFC 229 last October.

Tensions have not died down, though, with McGregor posting then deleting an alleged Islamophobic tweet directed towards Nurmagomedov’s wife.

Nurmagomedov, a practising Muslim who has made inflammatory accusations of his own about McGregor in recent days, responded: “If you think that insulting entire religion you be safe, you are mistaken.”

The UFC has branded the saga “unacceptable”.

In a statement on the company website, president Dana White said: “I am aware of the recent social media exchange between Khabib Nurmagomedov and Conor McGregor.

“The ongoing situation has escalated to a level that is unacceptable. As such, we are taking the necessary steps to reach out to both athlete camps and this situation is being addressed by all parties internally.” - PA