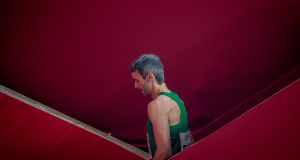 Ireland’s Thomas Barr after finishing fourth in the semi-finals of the 400m hurdles at the World Athletics Championships in Doha, Qatar. Photograph: Morgan Treacy/Inpho

Faraway, so close. Thomas Barr came into the homestretch of the super competitive 400 metre hurdles with a place in the World Championship final at his beckoning, only hard as he tried to reach out he couldn’t quite grab it.

It was properly billed as one of the headline events in Doha and the semi-finals proved it: Barr, running in the third semi-final, needed to finish in the top two to guarantee his place, but after pouring every last ounce of effort in the final metres he finished fourth in a season best of 49.02 seconds, .05 of a second off Japan’s Takatoshi Abe in third.

Instead those top two places went to two of the gold medal challengers, the American Rai Benjamin, who ran 46.98 in Zurich last month, taking the win in 48.52, with home favourite Abderrahman Samba, the Qatari athlete who dominated the 2018 season when recording his best time of 46.98, taking second in 48.72.

There were also two fastest non-qualifier positions for Monday’s final, both those coming in the first two semi-finals – the opening one t won by Alison Dos Santos from Brazil in a personal best of 48.35, the second semi-final won by the defending champion and second fastest man in history, Karsten Warholm from Norway, who cruised home to win in 48.28.

Kyron McMaster from the British Virgin Islands, another medal contender, was disqualified from his semi-final after crashing through the first hurdle.

“Disappointed,” he said, “because I thought it was going to be faster, it felt like it was faster. I thought coming into the homestretch ‘I have this, I’m actually in a good position’, but when I went to open up on hurdle eight, hurdle nine, I just didn’t have that same strength as in the heat. Then coming over hurdle 10 I really had to stretch it.

“So a tough race, but I’m happy to say I came away and gave it my best, 400m hurdling is a very tough event at the moment. I’d have liked to have run a little faster, under 49, but it just didn’t happen this year, and that will kind of add fuel to the fire for next year.

“It’s tough as well it’s been such a long season, but I came here feeling good and ready to race, it just wasn’t there as much today as I would have liked. But I’m back in underdog status now, where I like to be, so I’ll go away now and build again for Tokyo.”

Barr’s 49.02 left him 10th best overall in the event, and was also the third straight time he ran short of the World Championship final. Four years ago in Beijing he was edged out after finishing fourth in his semi-final, and two years ago in London, Barr saw his hopes literally go down the toilet due to the outbreak of gastroenteritis, having also come through his heat.

Still, Barr has the confidence too of winning the European bronze behind Warholm in Berlin last summer, and the close margins in Doha suggest he’s still very much a contender for the Olympic final in Tokyo next summer, after finishing fourth in Rio in 2016

Barr had done everything right in Friday’s heat too, clocking 49.41 seconds to Warholm’s 49.27, the first four finishers in each heat guaranteed a place in those three semi-finals. This now real talk of them bettering the world record of 46.78 set by the American Kevin Young when winning the Barcelona Olympics back in 1992, come Monday’s final.

Mark English was also on the track earlier for his 800m heats. In the fourth of the six heats, and in a slightly surprising tactic, English committed himself to the front from the gun, opening a five-metre lead on the rest of the field and still leading at the bell, passed in 51.88.

In the backstretch, however, English started to grimace, and one by one the field of runners slowly swept past. He ended up seventh in 1:47.25, well short of his season best of 1:45.94, and while his tactics were certainly bold, contrasted with arguably his best race of the season when he came from behind to win the Birmingham Diamond League.

“I just tried to put myself in contention for one of the six fastest loser positions,” said English, Kenya’s Ferguson Cheruiyot Rotich winning the heat in 1:45.98. “It didn’t work out obviously, and it’s hard to analyse the season as a whole straight after the race, and what to take from it.”