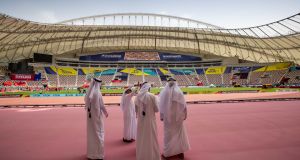 A general view of the Khalifa International Stadium aheaf of the World Atheltics Championships in Doha. Photo: Morgan Treacy/Inpho

Remember Usain Bolt? We only have to go back 16 years to Paris in 2003 when the World Championships weren’t in some way influenced by his name, or a time before Bolt began to demand all the athletics headlines over everybody else, for better or occasionally for the worse.

Bolt was only 17 when he ran his first World Championships two years later in Helsinki, in 2005, making the final of the 200 metres and already tipped as the next big thing, only to slow up with an injury and finish last in 26.27 seconds. That race was won the American Justin Gatlin, a year before he returned a second positive doping test.

Two years later in Osaka, those of us seating in the press seats realised just how big Bolt would become, when he finished a close second in the 200m to another American, Tyson Gay, clocking 19.91, and the rest is athletics history. A year later Bolt was double Olympic sprint champion, breaking both world records, before at the 2009 World Championships in Berlin, he lowered them again – 9.58 for the 100m, and 19.19 for the 200m.

Ten years later and both those marks still stand to the Jamaican. At the last World Championships in London in 2017, Bolt already had one foot in retirement, concentrating on the 100m to give himself a best of a winning send-off: he finished third, and that race was won by Gatlin.

At age 37, Gatlin is still looking to demand some headlines when the 17th World Championships get underway in Doha, Qatar on Friday afternoon, for better or likely for worse. Bolt’s absence however means there’s no talk of a world record in either sprint event, and those 2009 marks may well be carved into the granite of the old Olympic Stadium in Berlin.

What Bolt’s absence also allows is for other events and athletes to demand some of the headlines, and for world record talk that begins with the men’s 400m hurdles – which for better or for worse also happens to be where Thomas Barr is looking to make his mark.

Without doubt it’s one of the ultimate best events in Doha, with the times to prove it – three of the world’s four fastest men in history will line up in Friday evening’s heats, and come Monday’s final there will be talk of bettering the world record of 46.78 set by the American Kevin Young when winning the Barcelona Olympics back in 1992.

Fast closing in on that mark is defending champion Karsten Warholm, the dynamic Norwegian so far enjoying a perfect year, running a European record of 46.92 at the Zurich Diamond League, the second fastest ever. Not far behind was the American Rai Benjamin in 46.98 – the first time in athletics history two men have dipped under 47 seconds in the same race. The third member of the sub-47-second club in Doha is home favourite Abderrahman Samba, the Qatari athlete dominating the 2018 season, recording his best time of 46.98.

Barr is certainly under no illusions of the task he faces in Doha. He’ll get an immediate reminder too given he has Warholm for company in his opening heat on Friday evening (6.35pm Irish time): drawn in lane seven, with Warholm in lane four, Barr’s season’s best of 49.11 ranks him third fastest in his heat, and with the top four plus the four fastest losers qualifying for Saturday’s semi-finals he should get over that first hurdle.

At least the searing heat won’t be an issue – the Khalifa International Stadium is fully air conditioned to a pleasant 24-26C: “I didn’t expect the air conditioning to be that effective, but yeah, it is nice and cool in here, and perfect for racing really,” Barr said on his first visit to the stadium last night. “It’s still very warm outside, on the warm up track, but it’s an amazing stadium. These championships have also been a long time coming so really looking forward to getting out and racing now.”

Truth is Barr will need to run close to his lifetime best of 47.97, clocked when finishing fourth in the 2016 Rio Olympics, to give himself a chance of making Monday’s final, assuming he gets over this first hurdle. After seeing his 2017 World Championship hopes go down the toilet due to the outbreak of gastroenteritis in London two years, he has the confidence too of winning the European bronze behind Warholm in Berlin last summer, and believes he can get back into sub-48 second territory in time for Doha.

Part of the beauty of 400m hurdling is that form often goes out the window come championship finals. Barr was proof of that in Rio, his fourth place finish coming off a summer interrupted by injury, leaving him with the feeling: what if? “Yeah, I was the outsider coming in, even from the semi-final. Anything can happen in the race, everything is wide open, and if I can get myself into the final in Doha, I’d like to think I could challenge for medals.”

Barr did miss a few weeks training with a calf muscle injury, which ruled him out of the national championships in July, and the quest for a nine-in-a-row. Times do level off a bit after Warholm, Benjamin and Samba, and part of the opening challenge is to ensure a good lane draw for the semi-final.

Barr is part of the eight-strong Irish team in Doha, Michelle Finn also in action on day one in the 3,000m steeplechase heats: her season best of 9:41.23 ranks her 13th fastest in the field of 15, with only the first three sure of qualifying. Mark English is out on Saturday in the 800m heats, with Brendan Boyce also reporting to be in the best shape of his career going into the gruelling 50km walk, starting at 11.30pm local time, only with no air conditioning to ease the searing heat.

The Irish in Doha – event and preliminary schedule (all times Irish)