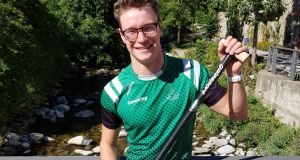 Robert Hendrick has qualified for the Olympics.

Robert Hendrick, a 21-year-old who had never reached a semi-final at this level before, gave Ireland canoeing a place at the Olympic Games. The Kildare man finished 11th at the canoe slalom World Championships in La Seu d’Urgell in Spain with a remarkable performance. He placed Ireland ninth overall, with 11 nations booking places in Tokyo 2020.

Hendrick had the pressure of going off first of the 30 competitors. He had a clean run down the course, staying calm and taking 95.12 seconds for the run.

The time held as the best of the day all the way to the 10th competitor, Thomas Koechlin of Switzerland, took over. Immediately afterwards there was a new leader as Grzegorz Hedwig of Poland recorded a great time of 91.96 seconds.

From there it looked like Hendrick might be pushed out, but that was not how it turned out. Top names began to fall. Michal Martikan of Slovakia was given a late 50 second penalty and was a shock drop-out. Australia and Germany also failed to make the cut. Britain only made it with the very last paddler out, the experienced David Florence. He pushed Hendrick into 11th, which meant the Irishman missed out on the final by one place.

However, he had done the main job.