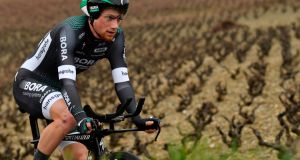 Ireland’s Sam Bennett suffered a mechanical problem, ending his chances in the opening leg of the Santos Tour Down Under. Photograph: Philippe/AFP/Getty Images

Having taken 14th in the sprint in his first race of the season last Sunday, the People’s Choice Classic, Sam Bennett has been further back in the first three stages of the Santos Tour Down Under in Australia. The Bora-Hansgrohe rider has lost time each day, with a mechanical problem putting paid to his chances on Tuesday’s opening leg.

Since then, the effects of a bad cold which derailed his training has been felt, although he rode well in support of team-mate Jay McCarthy in Thursday’s third stage. McCarthy started the day fourth overall, 12 seconds behind the leader Caleb Ewan (Mitchelton-Scott), and tried to take a time bonus in the intermediate sprint at 50km to go.

Two riders were in a breakaway, with this meaning that just one second was up for grabs. McCarthy tried to take that but was challenged by Ewan’s team-mate Daryl Impey, who started the day two seconds ahead of him in second overall. When it became clear that Impey was going to beat McCarthy, Bennett easily sprinted past and ensured that the South African wasn’t able to pad his buffer over McCarthy.

Bennett slipped back afterwards and crossed the line two minutes and 17 seconds back. He will continue to help his team-mates on Friday and Saturday, then will hope to show well in Sunday’s concluding criterium. However, he will likely be required to lead out team-mate Peter Sagan, who is riding strongly.

Meanwhile, Irish riders will continue their build-up towards the world track championships when a small quad competes in the final round of the Tissot UCI Track Cycling World Cup in Minsk, Belarus, this weekend.

Just three riders will make the trip. They include Felix English, who took gold and silver medals with Mark Downey in the Madison race at 2016/2017 World Cup season events. English will ride the Omnium on Sunday. He was fifth in that event in the European track championships in October, then placed eighth in the opening round of the World Cup in November.

Also racing in Belarus will be Robyn Stewart. She is the first Irish woman to qualify for the sprint in the Track World Cup, and hopes to achieve the same distinction at the track world championships. The third member of the team is Xeno Young, who will ride the individual pursuit on Saturday.

He showed his class in that event last year, taking silver medals in both the world championships and the European championships as a junior. He is a first-year senior and while it will take time for him to reach his full potential, he has ambitions of a strong showing in the Commonwealth Games in April.

Bale and Dele Alli score as Tottenham qualify with draw in Austria 21:19
Connacht use visit of Benetton to give as many players as possible match time 20:51
Celtic surrender two goal lead in AC Milan defeat 20:16
Fans told not to excessively sing or hug as Premier League crowds return 20:02
Gillane’s chances of playing against Waterford rated ‘50-50’ 19:20