Ian O’Riordan: Many countries have found the Daily Mile improves fitness and creativity 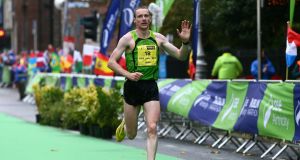 Sean Hehir is among those to have been championing the Daily Mile here. Photograph: Cathal Noonan/Inpho

Shane Ross popped his head up in the Dáil again this week, the Minister for Sport singing his own praises, as he usually does, on the early implementation of our new National Sports Policy 2018-2027.

Before a meeting of the Joint Oireachtas Committee on Transport, Tourism and Sport, Ross declared his unbiased verdict on exactly where things were at and where they’re going – just over four months since the policy document was launched on a lovely sunny day in July, the headline of which was the promise to double investment in sport from the current annual figure of €111 million to €220 million.

“Our ultimate ambition is for every citizen to engage regularly in some form of sport and physical activity, irrespective of their background or their physical capabilities,” Ross said on Wednesday. “We want to elevate Ireland to the top of the table for participation. To achieve the aims of the policy it is clear that we must prioritise certain groups, to help them to engage more in sport and be more physically active generally.

“The committee members know as well as I do the extraordinary benefits this can deliver for people’s physical health and mental wellbeing.”

No one could argue with any of that, even if the somewhat lofty target and ambition of the policy is to increase overall participation in Irish sport from 43 per cent to 50 per cent of the population by 2027 – the equivalent of 250,000 more people participating in sport in nine years’ time.

Brendan Griffin, Minister of State with responsibility for sport, also spoke about those “certain groups”, and it’s easy to see without looking too far where they are exactly: with that Griffin championed the Daily Mile, which is quietly revolutionising sporting participation not just in Ireland but in a growing number of countries in Europe and beyond, and which like most of the best things in life is more or less free, and perfectly sustainable.

What is the Daily Mile? It was the brainchild of Elaine Wyllie when she was head teacher of St Ninian’s Primary School in Stirling, Scotland, in 2012. Concerned about the lack of physical fitness displayed by the children, Wyllie founded the campaign with the simple aim of getting her pupils moving every day to improve their overall fitness and wellbeing, running one mile every day, typically in a 15-minute break just before lunchtime.

Recognising that obesity was fast becoming the most prevalent childhood illness in Europe, Wyllie felt she had to try something. The results were soon speaking for themselves. After just two years, there was an almost zero rate of obesity among the children at St Ninian’s, and perhaps just as importantly, according to the teachers, the pupils settle far easier into lessons after their daily mile run. Fitter, happier, more productive, as Thom Yorke would say.

Wyllie is now a full-time promoter of the Daily Mile, watching it fast revolutionise activity levels in primary schools: it’s now been adopted by more than 6,400 schools in 44 countries, to include some 1.3 million primary school children. In the Republic of Ireland there are now 380 schools across all 26 counties signed up to the programme since a pilot began in April, under the direction of Athletics Ireland, along with local authorities and Sports Partnerships.

The Daily Mile also provides ample proof that increasing sporting participation doesn’t need to be a costly exercise. A large part of its appeal is its simplicity, with each school setting aside 15 minutes for activity each day, during which most children average a mile of running or walking, or sometimes more.

Rain or shine, there’s no set up, no tidy up and no equipment required. Nor is any special staff training needed nor any extra workload for teachers. Children run in their uniforms so there’s no kit or changing time is needed. It’s also fully inclusive; every child, whatever their circumstances, age or ability.

Seán Hehir, two-time Irish marathon champion and Rio Olympian, is among those to have been championing the Daily Mile here since day one. Scoil Mhuire Gan Smál in Inchicore, Dublin, was one of the first schools to bring it on.

“As a primary school teacher I have first-hand experience of the outstanding benefits that this initiative can bring to a school,” he said, “enhancing the physical health and overall wellbeing of participating students while simultaneously impacting positively on learning and academic achievement in the classroom.”

The next step is to make it government policy, to allocate time for children to walk or run their daily mile. In the UK it has already been included in the government’s strategy to halve childhood obesity by 2030, and is being championed there by Andy Murray, among others.

Increasing participation will always be central to any sporting policy document, but what sets the Daily Mile apart are the immediate and lasting benefits. Research led by the universities of Stirling, Edinburgh and Highlands & Islands has found that the Daily Mile not only improves fitness and body composition in children, it also improves their creativity. A three-month pilot inspired by the Daily Mile also found that when children at a school in east London ran for 15 minutes three times a week, teachers found improvements to fitness, self-esteem and wellbeing.