Robust Ireland edged out by Australia in World Cup opener 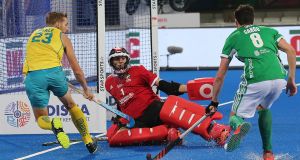 A robustly defensive game against Australia could not save Ireland from a 2-1 defeat in their first game of the men’s hockey World Cup in India.

Playing a counter-attacking game, Ireland absorbed tons of pressure from the number one ranked side in the world, whose winner came early in the third quarter.

In an end-to-end move man of the match Tim Brand took a long reverse pass from midfielder Corey Weyer to beat the outstanding David Harte after the Irish goalkeeper had saved the first effort.

Australia initially took the lead in the first quarter after 11 minutes when Blake Govers converted a retake on their first penalty corner.

Govers used power to beat goalkeeper Harte, his drag flick whizzing past high on the left side. Harte might have gotten a glove to it but the pace of the ball beat the Irishman for Australia’s early breakthrough.

But that was short lived as Ireland struck back immediately from open play with Shane O’Donoghue picking up a ball slipped into the Australian circle by Sean Murray.

The Dubliner flicked the ball in the air and hit it past the advancing Australian goalkeeper Andrew Charter 13 minutes into the game to level the match.

The third and fourth quarters were all Australia pushing forward with Ireland defending and frustrating the Australian front line.

Eventually Brand made the break through on 34 minutes and although Australia pressed Lee Cole, Conor Harte and Jonathan Bell kept Ireland to within a goal, Bell superbly taking a drag flick off the line on 36 minutes.

Ireland will be pleased they defended so well against a team who have won the last two World Cups. Their next pool match is against China on December 4th before facing England in the last pool game on December 7th.