Connacht’s spirits high as they prepare to face down Cheetahs 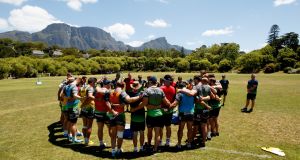 The Connacht squad in a huddle during training at Wynberg Boys High School, Cape Town, as they prepare for the game against the Cheetahs. Photograph: James Crombie/Inpho

Connacht have made five changes from last week to the starting team to face the Cheetahs in Bloemfontein.

Adeolokun, starting on the wing, is the only change in the Connacht backline. He will be part of a back three that includes Matt Healy and Tiernan O’Halloran at fullback thus providing Connacht with pace on both sides.

Thornbury is starting his first game since returning from a shoulder injury picked up in the win over Scarlets earlier in the season.

“Coming over here we set ourselves the target of two wins and that firmly remains our goal,” said Connacht coach Andy Friend.

“The win against the Kings last week was hugely important for the morale among the group and it sets us up for the challenge of taking on the Cheetahs in Bloemfontein.”

Friend’s side face a home team that like to throw the ball around and play a running game. Cheetahs tend to open sides up by widening the pitch and creating space and are coming off a 31-25 win over Benetton last week.

The teams have met twice before and both matches were closely-fought, with the Toyota Cheetahs winning their home match 26-25 last season, while Connacht registered a narrow 23-15 victory in Galway.