Keeping it country: success and failure in Irish distance running 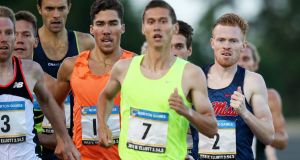 Ireland’s Sean Tobin during The Morton Mile. His confession this week is another reminder that too much success can ruin any athlete as surely as too much failure. Photograph: Tommy Dickson/Inpho

Too much success can ruin you as surely as too much failure. Marlon Brando said that to Truman Capote during an interview for The New Yorker in 1957 – and he might as well have been talking about Irish distance runners on scholarship in America.

There is nothing more common in that now 70-year history (Jimmy Reardon, 1948, Villanova, et al.) than the story of the promising young Irish athlete who heads stateside, blazes the trail on and off for the four years, and is never heard much of again – on the track, the field or the country. I know that because I was one of them.

That doesn’t necessarily mean they’ve been a failure. For the many who went on to succeed on the Olympic, World or European stage – Ronnie Delany, John Lawlor, Noel Carroll, Frank Murphy, Eamonn Coghlan, Ray Flynn, John Treacy, Frank O’Mara, Paul Donovan, Marcus O’Sullivan, Sonia O’Sullivan, Niall Bruton, Mark Carroll, Mary Cullen, Ciarán Ó Lionáird (off the top of my head) – many others simply took a different path, some ruined by too much success in college as much as too much failure.

That doesn’t mean they’ve all stopped making their mark on exactly what and where they set out to achieve. One such story lost, inevitably, behind the great coaching success in the Aviva Stadium last Saturday is the success of Mick Byrne in Madison, Wisconsin.

When Byrne was 18, still sharing a bedroom with his four brothers in Dublin, he took up a running scholarship at Providence College in Rhode Island, graduating 40 years ago already, and in most ways has never looked back. Byrne’s legacy at Providence includes a college 4xmile record of 16:20.90, which still stands, and even if he never ran in the Olympics or World Championships, he’s become one of the most successful distance running coaches in America.

There is some legacy there too: Mayo-born John McDonnell, who before his retirement in 2008, won an unparalleled 40 NCAA team championships as coach at the University of Arkansas, including 11 cross country, 19 indoor track and 10 outdoor track – more than any coach in any sport in US college history.

Byrne spent some years back home, working at the Philips factory in Dublin, before returning to the US in 1984 to take up an assistance coaching role at Iona College, upstate New York, soon becoming head coach, and over the next 24 years built up one of the most successful distance running programmes in the northeast. By the time he left Iona, in 2007, they were the second best cross country team in the American collegiate rankings.

From there Byrne went to the University of Wisconsin, in Madison, and since becoming the combined director of the cross country and track and field programme, has guided the college to seven NCAA national championships and eight individual national titles on the country, plus another 12 in track and field.

The latest of those came last Saturday, when Byrne matched another rare piece of American distance running history. The University of Wisconsin hosted the NCAA cross country championships, arguably the hardest race to win in America, and one of Byrne’s athletes Morgan McDonald – a senior from Sydney, Australia – became the first male runner to win the title on his home course since Bob Kennedy won for Indiana in Bloomington in 1992.

That 1992 race also marked a sort of high-water mark of Irish distance runners in America, and I know that because I was among them. There were 14 Irish runners in the men’s race alone, including three in the top 10: Mark Carroll from Providence College was third, Conor Holt of Oklahoma seventh, Eddie O’Carroll of Western Kentucky ninth. Frank Hanley was up there too in 13th, Niall Bruton from Arkansas was 25th, Cormac Finnerty of Clemson 41st, and Ken Nason of Villanova 52nd; Seamus Power of East Tennessee ran with the leaders for a long time before losing ground.

Many of them went to bigger and better things: Carroll, Bruton and Finnerty later ran for Ireland in the Olympics, Carroll and Bruton’s times still holding up on the Irish record books; Power went on to dominate Irish cross country running and Nason was later Irish 1,500m champion.

That Irish pipeline, as it became known, has slowed down significantly in the years since, and the last Irish athlete to make a proper mark on the NCAA cross country was Sean Tobin, who finished 12th last year, running for the University of Mississippi. Just three weeks later Tobin was also the top Irish finisher at the European Cross Country championships in Slovenia, finishing 15th – leading the Irish men’s team to fifth best in Europe.

Tobin’s confession this week that he felt “a failure, miserable, in a dark place really” since graduating from Mississippi this summer and returning home to Clonmel is another reminder that too much success can ruin any athlete as surely as too much failure. Tobin certainly wasn’t a failure at Mississippi, running 3:59.91 in his first season, still aged 19, becoming the youngest Irish athlete in history to break that still magical four-minute barrier, and the fact he’s still hungry for more success should also be a reminder to Athletics Ireland that this post-collegiate period, especially for those returning to the country, is now critical when it comes to providing support.

Tobin found his way back by chance, thanks to the Dublin Track Club, set up by Feidhlim Kelly, coach and sometime pacemaker on the Irish athletics scene, to provide some group dynamic for Irish distance runners. Tobin might well have gone down a different path: instead he’s running at Abbotstown on Sunday, favourite to become National senior cross country champion, still one of the most cherished and hard-earned titles in Irish sport, and I know that because my dad won five of them.

1 Cian Healy: ‘Realistically I got away with murder when I was younger’
2 Seán O’Brien: Anger over my parents’ break-up never left me
3 Johnny Sexton: ‘We just know we have to be a lot better in all areas on Saturday’
4 Ireland's centre will hold thanks to Henshaw and Aki’s midfield muscle memory
5 Gerry Thornley: Antoine Dupont and France look perfectly primed for Ireland visit
Real news has value SUBSCRIBE

World champion Christian Coleman to miss Olympics after receiving two-year ban 18:53
Sub-four miler Michael Woods kicks to another Vuelta stage win 18:03
Ukraine’s win in Greece leaves Ireland needing to beat Germany 17:44
Ladbrokes and Coral to leave racecourse betting rings in Ireland and Britain 17:12
Barbarians’ coronavirus breaches will not be investigated by police 16:57
Here is your handy guide to sport on television this week