Dun Laoghaire Regatta could yet break its own entry record 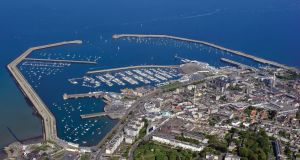 The news that next week’s biggest Irish sailing event may yet break its own entry record is a shot-in-the-arm for Dun Laoghaire yacht club organisers.

Volvo Dun Laoghaire Regatta will exceed 460 boats for next week’s 2017 edition, just 20 boats off 2007’s 480 record in a fitting tribute to the harbour in its bicentenary year.

Thirty five classes will be in the running for the boat of the week trophy after four days of competition for 2,500 sailors on Dublin Bay.

Where there is quantity, there will also be quality with the hottest IRC-rating fleets of the season assembling in Dun Laoghaire. The result eclipses all other comparable regattas on both sides of the Irish Sea, and with a growing UK attendance it holds a candle to the UK’s biggest regatta in Cowes too.

Two boats are coming from the Isle of Man, 18 from Wales, 10 from Scotland and 14 from England. In a nod to Dun Laoghaire yacht club organisers that a European market might be worth looking at for 2019, there is a single entry from Holland.

Over four days, starting next Thursday afternoon, 300 volunteers will stage 290 races for a mix of cruiser-racers, one-design keelboats and dinghies, plus a unique classics division, all wrapped up in one Irish Sea sail-fest - with Dun Laoghaire as its centre.

Regatta chairman Tim Goodbody maintains one of the reasons it attracts so many entrants is that it is one of the least expensive sailing events in Europe, thanks to generous sponsorship and support across all four of the town’s waterfront clubs.

It’s confirmation - were it needed - that when it comes to promoting sailing in Ireland, there can be great dividends in collaboration between clubs.

Class one, in particular, has produced one of the hottest fleets of the season that includes 11 J109s. John Maybury’s ICRA triple champion Joker II will be on home waters and Royal Irish club-mate, Rockabill VI, (Paul O’Higgins), the recent Dun Laoghaire to Dingle winner, is also in the mix. But even with the 27-boat entry there are still notable absences including Rush Sailing club’s Scottish Series winner Storm (Pat Kelly) and also Sovereign’s Cup winner Fools Gold (Rob McConnell).

There was disappointment on Thursday with the cancellation of ISORA’s Lyver race that was designed as a feeder race to bring UK boats into the Bay. It was cancelled due to strong northerly winds that made it difficult for Dublin boats to make the Holyhead start but it was also because entries had dropped following this month’s arduous edition of the Dun Laoghaire to Dingle race where over half the fleet retired. The Lyver race has been rescheduled for July 21st.

Power and McCann, in their first year in the 420 together, secured top spot at the ISA Youth Pathways in Ballyholme in April and are clear favourites for this weekend’s Irish 420 Championships staged as part of Dinghy Fest.

1 Gerry Thornley: England primed to show their best against Ireland
2 Should fans be allowed drink in the stand at sporting events?
3 Stopping Jonny May’s pace must be high in Ireland’s priorities
4 Frank Lampard says Harry Maguire should have been sent off
5 Jürgen Klopp wants Liverpool to show they are contenders
Real news has value SUBSCRIBE