Groundswell of accolades a fitting tribute to the late Pete Flynn 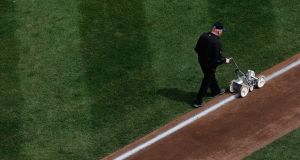 Pete Flynn prepares the field for the game between the Philadelphia Phillies and the New York Mets during the last home match at Shea Stadium on April 8th, 2008. Photograph: Photograph: Nick Laham/Getty Images 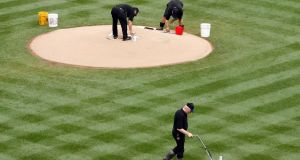 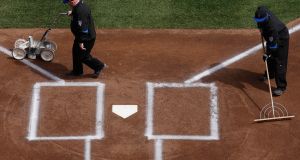 After playing the last bars of I’m Down, The Beatles left the stage and Shea Stadium kept up the cacophony of shrieking that had drowned out every note of their performance.

A white, reputedly armoured, station wagon with the New York Mets logo emblazoned on the side appeared and the band jumped in. Sound-tracked by yet more screaming, the car raced from second base to a gap in the centre-field wall where, beyond a burly corridor of NYPD Blue, lay the road to safety.

In the footage, a couple of impish Liverpudlian arms wave out the windows at the 55,000 demented fans left in their wake, and, if you look closely enough, you can just make out Pete Flynn at the wheel.

Forty-three years after that hot August night in 1965, Paul McCartney returned to the old ballpark in Flushing to do a turn at a Billy Joel concert called “The Final Play at Shea”, part of the festivities to mark its closing and the arrival of the wrecking ball.

McCartney’s flight arrived late into JFK that night and time was of the essence so a golf cart was laid on to speed him from the tunnels beneath the bleachers to the stage. As he took his seat for that short journey, the driver turned to shake his hand and said, “I drove you the first time you were here!”

In the decades between Beatlemania and Sir Paul, Pete Flynn had become the Mets’ head groundskeeper and an intrinsic part of the stadium, the club and New York sporting lore.

It is a measure of his stature that the bearded Irishman’s passing at 79 last week earned lengthy obituaries in the New York Times and USA Today, and a stream of accolades from all across the game. Like so many Irish emigrant epic stories, his career path was circuitous, accidental and highly improbable.

A farmer’s son from Ballinamore, Co Leitrim, Flynn had a brief stint bricklaying in Dublin before following an older brother to Canada in 1960 to seek his fortune in the uranium mines in Eliot Lake, Ontario.

When work dried up there, he decamped south to New York to where a couple of his sisters were already billeted. In the winter of 1962, he applied for a job as a handyman with the New York Mets ahead of their first season in the majors and built the advance ticket office at their temporary home, the reopened Polo Grounds. He had never seen a baseball before he walked through the gate but evinced a talent for landscaping so he was soon put to work tending the in-field.

On the night the Mets opened Shea Stadium in 1964, Flynn was pressed into service mopping up a sewage spill. On the night it closed, he stood on the side of the stage, and, from a few feet away, watched McCartney and Joel bang out I saw her standing there.

In between, he raised two daughters with his late wife, Anne McCarthy, and earned so many footnotes in club history that when he retired in 2011, the Mets held a pre-game on-field ceremony in which past and present players shook his hand and paid homage.

It wasn’t always like that. Every now and again, somebody from Mets’ management might sidle down to pass on a complaint from a player claiming a treacherous bump in the infield grass, rather than their own shortcomings, had caused them to commit a fielding error.

Flynn would give the very notion short shrift, knowing how hard he and his staff worked each day to have the sward as near perfect as could be. That he ended up being enshrined into the Major League Baseball Groundskeepers’ Hall of Fame spoke to how often he achieved that much too.

“One of my favourite memories was to come in the tunnel at Shea and see him working on a mower, or going about his work with passion,” wrote former Met Mike Piazza. “Or jokingly cranky when non-baseball events were on the field by saying, ‘Stay off me grass’ with an old Irish accent. You knew you were in the Major Leagues by the look of his fields.”

In the days after September 11th, 2001 when his beloved Shea had become a staging post for the relief effort, awash with emergency supplies, the veteran New York sports reporter Mike Lupica bumped into Flynn who offered a quote that captured the spirit of the time.

“They tried to blow us apart,” he said, in an accent that remained defiantly Leitrim throughout his life. “They brought us together instead!”

During a much different September back in 1986, the Mets punched their ticket to the play-offs and, delirious at the prospect of a possible second World Series, thousands of fans invaded the field to celebrate, some of them thieving sods of grass as keepsakes.

Later that week, the New York Daily News ran a cartoon strip called “Pete saves the day”. It depicted Flynn and his staff working through the night so the damaged turf could be restored and the bruised grass nursed back into shape in time for a game the next evening.

The last frame contained an etching of Flynn and the headline, “MVG: Most Valuable Groundskeeper”. A fitting epitaph if ever there was one.