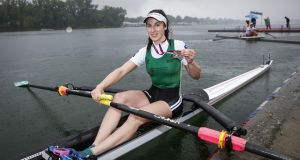 A terrific women’s eights final close to the end of two days of action provided a highlight at the giant Cork Grand League Regatta at the National Rowing Centre.

The composite crew of Skibbereen and UCC, driven by stroke woman Denise Walsh, beat NUIG by surging past them with their final three strokes. Walsh said it was the first time, bar the five opening strokes, when they had led.

Did they know they had won?

“No!” came the chorus from all the women.

The rise in the standard of under-23 and junior rowing was very evident. Niall Beggan and Andrew Goff put it up to Paul and Gary O’Donovan in the double sculls final. The Commercial/UCD under-23 crew led the Ireland lightweights at halfway and stuck to their task even when they were passed out. They lost by just a length, relegating internationals Shane O’Driscoll and Mark O’Donovan to third.

“That was a good race,” said Paul O’Donovan, before good-humouredly slagging Goff and Beggan.

O’Donovan was dead serious on Saturday. He was so dominant in the single sculls final that he beat Gary by 13 seconds – and still set his fastest time in a single, six minutes 50.82 seconds, almost certainly the fastest any sculler has done over this exact course.

“It’s nice to see how fast you can go. You get a good training effect from that as well,” said Paul. “If you just settle back you’d be wasting your time. You get more out of pushing yourself.”

Shane O’Driscoll and Mark O’Donovan, who have taken gold medals at three international events this year, won the open pair final after a battle with Shane Mulvaney and David O’Malley, the Ireland lightweight pair for the World Under-23 Championships.

Sanita Puspure beat Monika Dukarska in the heat of the women’s single sculls, but then pulled out injured before the final, which Dukarska won.

Lee’s junior women continue to impress. They had won the Division One quadruple on Saturday, while Margaret Cremen (who will compete for Ireland at the World Junior Championships) and Aoife Lynch finished a good second to Cork in the Division One double.

NUIG won the men’s senior four, but lost out in a good race in the men’s eights. UCD led down the course, but NUIG chased them and came within a third of a length at the finish.