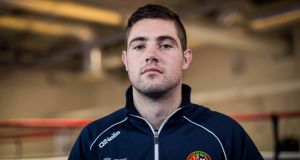 If the IABA does not comply SI said funding to the sport is at risk. The governing body were given until the end of June to sort out serious governance issues including the anomaly of two people claiming to be the rightful chairman.

Dunne returned last weekend from his first outing with the Irish team to Ukraine, where Ireland won three European medals, including one gold medal from light heavyweight Joe Ward.

“For me it’s not a major issue right now,” said Dunne about Friday’s deadline. “We prepare the way we always would. For me it’s making sure the athletes are happy, making sure they are in the right frame of mind and making sure we’re going away in the best possible physical and mental condition.”

It is known that Ward has been concerned about his funding. The 23-year-old’s unprecedented third European gold medal now makes him a podium hopeful for Hamburg’s world event.

“We can hopefully accommodate all his needs. I try to alleviate all their concerns and deal with what needs to be dealt with,” added Dunne.

“But Joe still has a lot of developing to do, a lot of growing to do. I think we’ve got the right environment in the high performance unit where he can really grow into the athlete we all know and want him to become. I think Joe wants to lead the team.”

New to the position following the departure last year of Billy Walsh as well as several high-profile boxers Katie Taylor, Michael Conlan and Paddy Barnes; Dunne’s success in Ukraine was unforeseen after the disappointment at the Rio Olympics last year.

Ward is now the figurehead of Irish boxing, although his future has never been totally secure with regular stories connecting him with the professional ranks.

“I see Joe Ward leading the Irish team to the Olympic Games in 2020. That would be my vision for him,” added Dunne. “If we can help him develop over the next two years into the athlete we all know he could become . . . I think he will want to stay amateur. “

Four Irish boxers have qualified for the World Championships.