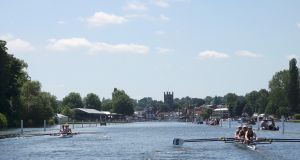 Four Irish crews are set to compete on the first day of rowing at Henley Royal Regatta on Wednesday. Three came through Friday’s qualifying round, with just Commercial, in the Wyfold Cup for coxed fours, not having to negotiate this route.

Commercial are a selected (seeded) crew: they race against Molesey ‘B’ first time out and would have strong hopes of at least being around to compete at the weekend.

Although they qualified, Trinity’s coxed four in the Prince Albert have also been seeded. They take on American opponents, with a likely clash against Newcastle University on Thursday if they make it through.

Trinity’s senior eight have avoided a seeded crew in the first round of the Temple Cup, as have Clonmel in the Fawley Cup for junior quadruples.

Former Ireland lightweight international Niall Kenny, now based in England and competing for Tideway Scullers’ School, qualifed for the Diamond Sculls, the premier event for single scullers. Should he make it through this round he will take on Robbie Manson in the quarter-finals. Manson set the world’s best time for a single sculler at the recent World Cup in Poznan, Poland.

The France lightweight double of Pierre Houin and Jeremie Azou, the Olympic champions, are a seeded crew in the Double Sculls.