Fitzwilliam to host return of Irish women’s open in July 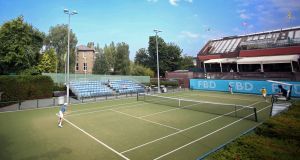 A revamped AIG Irish Open will return to Fitzwilliam Tennis Club in Dublin from July 22nd to 29th and will include the first Irish women’s open competition for 27 years.

The last time a women’s Irish Open tournament was played was in 1990 with this year’s event part of the International Tennis Federation Pro Circuit. The women’s competition was first held in Ireland in 1963.

The championship will include both men’s and women’s singles and doubles events and, aside from the prize money, world ranking points are also on offer.

The men’s event forms part of the International Tennis Federation’s Futures series, which is a level of tennis on the third rung of the sport beneath the ATP and Challenger Tours.

“We are delighted to be staging these tournaments in Fitzwilliam this year which gives our Irish players the opportunity to earn world ranking points on home soil,” said Tennis Ireland chief executive Richard Fahey.

“The historical event expands this year as it becomes a combined Ladies and Men’s Irish Open, the first time we have held a ladies’ professional event in Ireland since 2005.

The finals tournaments will be broadcast live on TG4 on Saturday, July 29th.