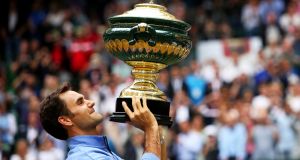 Roger Federer of Switzerland lifts his trophy after defeating Alexander Zverev of Germany to win at Halle. Photo: Tyler Larkin/EPA

If Roger Federer plays at Wimbledon anything like he did to win his ninth Halle title by blowing Alexander Zverev off the court in 53 minutes on Sunday, he will surely be there for the final weekend of the championships at the All England Club in three weeks’ time.

The bare numbers hardly tell the tale: 6-1, 6-3 to Federer, 58 points to 33 overall, winning 79 per cent of his service points, 52 per cent when receiving. He was razor sharp at the net, solid at the back, ruthless in the finish.

There was hardly an area of the game Federer did not dominate for extended periods, although the rallies rarely went longer than a few shots. Zverev, who had been so impressive all week, rushed his counters, botched several winners and at no point was really in the contest.

This was a statement match for both of them, brought together for a third time at opposite ends of their careers. The 20-year-old German wears his hair fashionably long; the 35-year-old Swiss recently had a serious short back and sides, reaching for the look of youth, perhaps. Inside a minute, Federer broke Zverev to love: the tennis equivalent of Anthony Joshua knocking out a young contender with the first punch of the fight.

Zverev, who had lost his first eight matches against top-10 players then beaten seven of the next 11 – including Federer in the semi-finals here last year – encountered the Swiss on one of his magical days. He was 0-3 down after 10 minutes. Twenty minutes in, Federer had three set points. Zverev hit long. Embarrassment loomed.

Federer gifted him a break with a sloppy forehand but quickly repaired the damage. In the final point of the third game of the second set, Zverev hunted down one of Federer’s many drop shots, slid under the net and jarred his left ankle. The old man in the bandana gave him a consoling pat on the back then resumed his systematic beating.

A final, imperious backhand volley put Zverev out of his agony. He took his licks graciously but, if it was a street fight, someone would have called the police.

“I don’t know if I’m ever going to win this tournament again,” Federer said in English courtside. “So I’m just going to enjoy it as much as I can.” He had to be kidding. Having watched Rafael Nadal compile La Décima three times on clay this summer, Federer will strain every sinew to post just one on the grass of Halle. He might even get an eighth title on the grass of Wimbledon, and then can start dreaming anew.

Trump in the rough over playing golf and US Covid-19 fatalities 18:12
Tottenham’s Carabao Cup tie at Leyton Orient off but no decision on walkover 17:45
Digital passport system could ensure horse movements if Brexit deal agreed 15:45
Awarding of 2023 Rugby World Cup to France part of Laporte investigation 16:12
Suarez’ Italian language exam rigged according to prosecutors 14:24
Here is your handy guide to sport on television this week