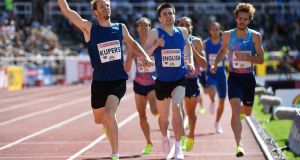 Mark English (centre) finishing second to Thijmen Kupers of The Netherlands in the men’s 800m at Stockholm last week. English registered an impressive victory in 1:49.02 at the European Team Championships in Finland. Photo: Anders Wiklund/EPA

Individual victories from Mark English and Brian Gregan helped seal Ireland’s European Team Championships First League status in Vaasa, Finland over the weekend, although they finished some way off contention for promotion to the top-flight Super League.

Finishing eighth among the 12 nations, with the top three promoted, Ireland actually ended up ranked 20th overall among European nations, their lowest placing since 2011, when they ended up 22nd – the lack of points in the field events being the main shortcoming.

Hopes for another victory from Thomas Barr in the 400m hurdles didn’t materialise as he faded to fifth in a high quality 400m hurdles in 49.73, won by Norway’s star Karsten Warholm in a championship record of 48.46 – Barr later complaining of a little fatigue.

Marcus Lawlor also pulled up injured in the 100m final, though still got himself over the finish line to earn the points.

It left Ireland with 238 points, just behind Romania, and ahead of Belgium, with Sweden, Finland and Switzerland all earning promotion.