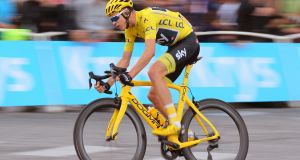 Tour de France champion Chris Froome will race in the Vuelta a Espana as he bids to become the first rider in 39 years to win both events back-to-back.

No rider has triumphed at the Tour and Vuelta in the same year since 1978, when French rider Bernard Hinault saw off his rivals.

Froome, who claimed his fourth yellow jersey in Paris on Sunday, has finished second three times but never won the Spanish race.

“I’ve got the opportunity and I’m certainly going to go for it,” Froome said. “The Vuelta is a race I love — it’s vicious but it’s three weeks that I enjoy.

“I’ve come second three times now and I’d love to win. To win both the Tour and the Vuelta in one year would be absolutely incredible.”

The Vuelta is the third of cycling’s three Grand Tours, along with the Giro d’Italia and Tour de France, and was moved from April to take place in August and September in 1995.

No British rider has ever won the Vuelta a Espana, which this year starts on August 19 in Nimes and ends on September 10th in Madrid.

Froome does not have long to recuperate but Team Sky principal Dave Brailsford believes his star man is capable of an historic double.

“There’s no reason why not,” Brailsford said. “We’ve got four weeks to the start of the Vuelta.

“We’ve got a couple of races in between but we’ll dust ourselves down a little bit and go and do it all over again.”