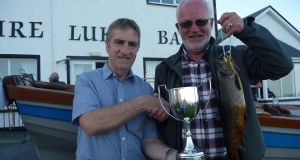 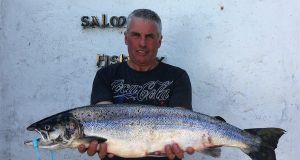 Gary Morrow with a fine 5kg salmon caught on prawn from the Sea Pools on the River Drowes. 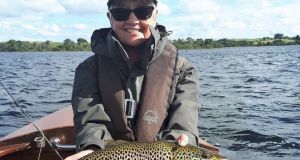 Elaine Stone from Leeds with her personal best trout of 1.2kg on Corrib, caught on a Green Peter. 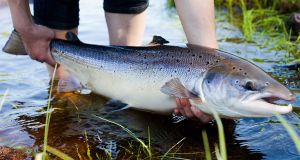 One of the many fine salmon caught on the River Ponoi on the Kola Peninsula, Russia, last week.

THE McConville Cup fly fishing competition on Lough Mask last weekend will probably be remembered as one of the lowest returns of trout for a long time. Just nine fish made the scales among 78 anglers. Wow!

One can blame the weather, flat calm for most of the day, but not even the ‘dries’ worked. Perhaps the trout were still on perch fry. And what about the ‘hot spots’ – all tried and tested – or maybe the wrong selection of fly patterns!

The plain fact is that the fish decided to ‘play hardball’, kept their heads down and paid little or no attention to the vast array of flies offered. It was just a bad day at the office for nine-tenths of the competitors.

However, that said, each of the nine anglers managed to coax a trout over 14in (35.56cm) to claim, ironically, the nine excellent prizes of offer. Matt Whitelaw from Westport left it late in the day to claim the honours.

With minutes to spare his boating partner, Sean Moogan tried the two ‘pins’ outside Gortmore Bay and up jumped, not once but twice, a ferox trout of 1.376kg (3lb) to grab Matt’s Alexandra tail fly. His prize, a 19ft Sheelin boat!

Aside from the fishing, the competition itself was extremely well organised, considering it was the first occasion for Bilberry/Lannagh AC to host the event on Mask with Maire Lukes in Gortmore, Tourmakeady as the focal point of activity.

After 24 years of holding a three-day competition on their home put-and-take fishery, the club decided, for stocking reasons, to make the switch.

At the prizegiving, chairman Mick Butler said: “We are delighted the way the day went. Far less organising involved and all the facilities are here in Maire Lukes including a most enjoyable meal. I would also like to thank our sponsors, in particular, Sheelin Boats for their main input into the first three prizes.”

PS: Let’s hope the fishing improves for the world cup which starts this Thursday!

The Ponoi River on the Kola Peninsula in Russia experienced a fantastic catch of salmon last week with 15 anglers landing over 550 fish, averaging 37 salmon per rod! To find out more about booking a trip, contact Joaquin Arocena and the Ryabaga team at info@frontierstrvl.co.uk or call 0845 299 6212.

Morrow’s fine catch on the Drowses

On the Drowes it was another week of blazing sun and very low water levels. Despite this, about 30 salmon were recorded. A sample of catches included Gary Morrow’s fine salmon of 5kg on prawn from the Sea Pools and Michael Joyce caught and released two grilse on fly from the Red Roof.

The Owenea Fishery was understandably quiet also with only 18 rods in attendance. French angler Pierre Rumeau recorded three grilse over three days, all on fly and Alan Watson caught and released two from Beat 2.

Trout fishing was hard work on Melvin. The six-man team qualifiers produced fair bags on Saturday but with flat calm conditions on Sunday only six fish were required to win the final.

On Corrib, in the Oughterard area, fishing improved predominately to mayfly. Colin Wright from Belfast had nine for his two outings on wet and dry mayfly, best fish 1.1kg. Robin Boyd and David Bromhead from England had eight trout and brothers Jerome and Pat Mullane had 10 over two days, all on dry mayfly patterns.

Visiting angler David Seagrave had 17 for three days on mayfly and olives and Shannon anglers John Fitzgerald and Donnie O’Loughlin had seven for their day.

Larry McCarthy of Corrib View Lodge said fishing for the first half of the week was difficult with bright sunshine and calm conditions. However, he is hopeful the summer mayfly hatch is almost here and fishing returns will improve.

Chris Lee and two friends had seven trout over two days on dry mayfly in the Greenfields area. Four guests staying at the lodge reported four trout up to 1kg on mayfly in the Inishanboe area.