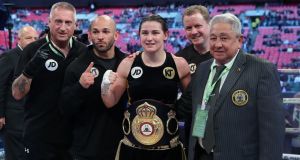 Katie Taylor has learned who her next opponent is just four days out from her US professional debut.

The Irish amateur World and Olympic champion will face Texas southpaw Jasmine Clarkson at the Barclays Centre in New York on Saturday night.

Taylor hopes to take her professional run to six wins from six before setting up a proposed world title clash in Ireland in the autumn.

Clarkson from Dallas was beaten in her last outing with Taylor going into the weekend bout as firm favourite for her sixth straight win.

For this bout as well as her previous one, which was on the undercard of Anthony Johnson’s world heavyweight title fight against Vladimir Kiltschko in Wembley Stadium, there have been issues finding a suitable opponent.

Taylor has not been troubled in any of her first five fights and has stopped her opponent three times.

The 31-year-old, who now spends long periods training in Connecticut, where her coach Ross Enamait lives, will fight over eight rounds on the Adrien Broner versus Mikey Garcia undercard.