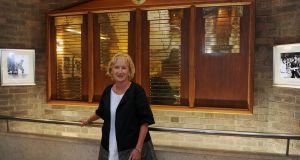 Helen Shields, president of Fitzwilliam Tennis Club. She is the first female president of the club in its long history. Photograph: Aidan Crawley

Just inside the lobby of Fitzwilliam Tennis Club is a striking and slightly confounding image. It is a photograph of Lena Rice, the Tipperary woman who won Wimbledon in 1890, striking a forehand in the heavy, full-length garb of her day, complete with jaunty hat.

Given that Fitzwilliam LTC has only accepted women members since 1996, its prominence is somewhat surprising.

Helen Shields insists its positioning has nothing to do with her but it’s an easy assumption to make.

On a nearby wall hangs the club’s roll of presidents. Fitzwilliam has only had 37 in its 140-year history, including her own father, and Shields is the 37th. Every single one before her was a man.

But she’s quick to point out that Lena Rice was one of many women who have played in Fitzwilliam for well over a century, despite the club’s previous image as a bastion of male privilege.

Until 1996 Fitzwilliam’s membership was men-only. Women could play there but only as invited guests. They could use the facilities but with restrictions, including not being able to buy a drink in the bar.

Shields (58) herself had guest status for years; first as the daughter of legendary Irish Davis Cup captain Joe Hackett and then under the club’s so-called ‘spouse privilege’ rule.

“My husband was a member here long before I met him,” she explains.

“Of course I would have thought this [men-only rule] was sort of ridiculous but part of me always thinks, like ‘Portmarnock [golf club]? Oh let them off!’

“I did think ‘why would you not have women in a club?’ but it didn’t really bother me because I was really happy playing with Lansdowne myself. Fitzwilliam, historically, was always a little different. It was ‘the home of Irish tennis’ and they didn’t even play league tennis back then.

“Now I’d probably be saying ‘would you ever get a life?’” she laughs.

“Even when the rule changed I didn’t join immediately. Two of my sisters did but I was pregnant with twins in 1997 so didn’t join until ’98.”

Her dad, she says, treated all nine of his children (six girls, three boys) the same when it came to sport and voted for the change.

It finally came on December 11, 1996, the fourth vote on the matter in five years. A majority had actually voted to admit women each time but that was the first vote to get the necessary two-thirds majority (429-159).

Joe Hackett, who turns 92 in August, played Davis Cup and in Wimbledon, where he got honorary membership in 1966, so tennis was always part of her life.

“We were lucky enough to have a court in the garden in Stillorgan and we were always outside, playing tennis, cycling on the court, knocking up on the gable wall.

“I don’t ever remember Dad teaching us,” she says. “He was in no way pushy. Tennis was always just our social life. When we were old enough we either cycled or got the train to tournaments all around the city and I was never brilliant, would just get through a few rounds.

“My earliest memories of Fitzwilliam are of Lad Lane because the club didn’t move here [Appian Way, near Ranelagh] until 1972,” she explains, recalling those halcyon days when the Irish Open at Fitzwilliam attracted players like Evonne Goolagong, Billie Jean King and Margaret Court.

“We often had replays of Wimbledon finals here a week later. All my family were ballboys and ballgirls and we plucked strawberries until our hands were red.”

Her tennis education also included a summer in Sheriff St working on the local ‘parks’ tennis’ summer camps and she was club captain in both UCD (where she studied business) and Lansdowne.

She was on Fitzwilliam’s executive committee when approached three years ago to take on the two-year vice-presidency which, traditionally, leads to the same term as president.

But she still visibly winces at her appointment in December 2016 making the front page of The Irish Times.

“Maybe I’m naive but I’ve never worked in big business and I don’t like this whole male/female thing. I genuinely felt it was always going to happen once women became members, it was simply a question of when.

“I’ve never had anyone say anything negative to me, quite the opposite and I think it reflected really well on the club.”

Fitzwilliam currently has 2,115 members with just 18 per cent female but the ratio in their intake is much higher. In the past two years an average 42 per cent of new members were women.

Shields’ priorities are not about gender but the more pressing issues of getting and retaining more under-40 members and leading a major refurbishment of facilities which is already at the planning stage.

Heretofore the club has not offered family memberships and junior members are confined to the ages of 14-18.

“Members tend to leave in their 30s and 40s and we have a sub-committee looking at why that is,” she explains.

Modernising the clubhouse and diversifying club activites (members recently formed their own triathlon group) are innovations she’s happy to lead while still retaining its tennis/squash core.

“I’d see my role, and it’s actually in the rules here, to be about listening to the members and bringing their views to the executive. I wouldn’t be a walkover but I wouldn’t be a bully either,” she grins. “I’ll stand up for what I feel is right and won’t be swayed on it but if my view is completely at odds with everyone else then obviously I’d have to row back.”

She is certainly no radical feminist but does believe women bring a healthier dynamic to both the club and boardroom and are more consensual by nature than men.

Shields may play down her role as glass ceiling-buster but she noticeably invited Judy Murray to speak at this year’s annual dinner, the first time a woman ever addressed it.

And she has led a very significant change in Irish tennis this week.

Fitzwilliam have collaborated with Tennis Ireland and sponsors AIG to not only resurrect the Irish Women’s Open after a 12-year hiatus, but also to run it in conjunction with the men’s equivalent, something that, internationally, doesn’t happen often outside Grand Slam events.

Shields pushed hard for both Opens to run concurrently and that is believed to have been a big factor in getting AIG (who sponsor the Dublin men’s and women’s GAA teams) on board.

“The Irish Open is actually the oldest ladies’ tournament in the world,” she enthuses. “We had a ladies singles here in 1879, two years before Wimbledon! Fitzwilliam hasn’t had the Ladies Open since 1990 but it used to host both events together historically so I thought why not do it again?

“For a start it gives us two doubles finals tomorrow night [Friday] and two singles finals on Saturday. It creates a bigger buzz and hopefully will increase the audience.

“But we’ve also got Irish girls and young men trying to make it on the circuit as professional tennis players which is a really tough life,” she adds.

“This is the only Irish event where our players can get world ranking points. That is huge for them and I just couldn’t see how you could have one without the other in a sport which already has such equality.”