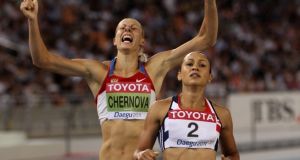 Jessica Ennis-Hill (R) finished second behind Russia’s Tatyana Chernova in the Heptathlon at the 2011 World Championships - Chernova was banned for doping in 2013. Photograph: Adrian Dennis/AFP

When the athletics world championships begin next month in London, there will be a few extra medal ceremonies.

Eleven athletes and five teams whose results from past world championships have been upgraded because of doping violations will receive their new medals, the International Association of Athletics Federations, the governing body of track and field, said on Wednesday.

Jessica Ennis-Hill and a women’s 4x400 relay team from the United States will receive gold medals and the full flag and anthem treatment.

Ennis-Hill placed second in 2011 behind Tatyana Chernova of Russia, who was suspended for doping in 2013. The United States women ran second behind Russia in 2013. Russia was disqualified from that race this year after one of its athletes, Antonina Krivoshapka, tested positive.

“It’s taken awhile but I’m so pleased to be finally receiving my gold medal!” Ennis-Hill said on Twitter.

A number of other athletes who have chosen not to attend the London event next month, or are unable to, will be given their medals on other occasions.

“I’m delighted that the athletes are properly honored for their achievements and what better way than in front of passionate athletics fans at a major championship,” the IAAF president, Sebastian Coe, said in a statement.

Four medals will be awarded 10 years after the events took place. Kara Goucher of the United States will receive a silver medal and Jo Pavey of Britain a bronze for the 10,000 meters at the 2007 championships in Osaka, Japan. The silver medalist in that race, Elvan Abeylegesse of Turkey, was barred for doping this year after her sample from 2007 was retested.

Irina Lishchynska, a competitor in the women’s 1,500 from Ukraine, and Rutger Smith, a Dutch shot putter, will also receive new medals from the 2007 event.

Goucher, 39, said she found out on Saturday that she would be receiving her medal on August 5th and has been scrambling to make arrangements to get her family to London, including renewing her son’s passport.

“For them to bring us out and put us in a stadium amongst our peers, it means a lot to me,” she said. “And I am just really grateful for the opportunity.”

She added: “I just hope this is the new standard.”

Some athletes who have been retroactively awarded Olympic and world championship medals in recent years have complained that the moment was less than magical without a ceremony.

“Man, I wanted to get that feeling of being on a podium and the world is applauding your achievement,” said the American high jumper Chaunté Lowe, who was elevated to bronze for the 2008 Olympics last year. “I was robbed of that moment.”

Holding formal ceremonies for reallocated medals on such a large scale at a major international event is unusual. In recent years, individual athletes have had smaller ceremonies to belatedly acknowledge their achievements.

Adam Nelson of the United States was awarded the gold medal in the shot put from the 2004 Athens Olympics nearly nine years later when retesting resulted in the Ukrainian Yuriy Bilonog’s being stripped of his win.

Nelson received his medal in 2013 “at the food court in the Atlanta airport,” he said.

At the United States Olympic trials last year, Nelson participated in a medal ceremony similar to those at the Athens Games. The gold medal was placed around his neck, a wreath was put on his head, and the national anthem was played.

Nelson said he hoped the delayed medal ceremonies would further open the conversation about doping in sports.

*Two Irish athletes have already enjoyed these retrospective medal ceremonies - Olive Loughnane receiving her gold medal upgrade from the 20km walk at 2009 World Championships in Berlin at a special presentation as part of the European Athletics Champions in Amsterdam last July.

Seven years previous, Loughnane had won silver behind Russia’s Olga Kaniskina, who was later revealed to be part of the systematic doping programme in Russian athletics, and stripped of all her championship titles by the Court of Arbitration for Sport (CAS) in early 2016.

Loughnane received her gold medal upgrade from Coe, and on the day she said: “There’s value in sentiment and it was great to share the moment with all the Irish fans here”.

Then last November, Rob Heffernan also received his Olympic bronze medal upgrade from the 50km walk London 2012, having finished fourth on the day, only for the Russian gold medallist there, Sergey Kirdyapkin, to later fail a series of doping offences, and likewise stripped of his medals by CAS.

Heffernan got his medal in front of a packed audience at Cork’s City Hall, including his wife and family, and it was also the first Olympic medal to be presented in Ireland.

1 TV View: Roy Keane but Daragh’s keener as Late Late fails to shoot the lights out
2 Irish pack must expose the weakness in England’s backrow
3 Keith Duggan: Liverpool’s charming man casting a shadow over Guardiola
4 Ireland Slam England at the Gardens to open up Grand ambitions
5 Alex Corbisiero recalls Twickenham 2012: ‘We were like sharks in the water’
Real news has value SUBSCRIBE