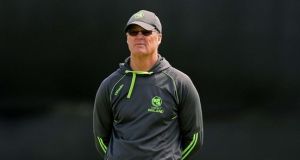 Bracewell is to move on at the end of his two-year contract in December, only six months after Ireland were granted full-member Test status alongside Afghanistan.

The New Zealander took over from Phil Simmons after the 2015 ICC World Cup and, despite a mixed record on the pitch over the past year, the International Cricket Council rewarded Ireland with Test status in June.

Ireland will tour the United Arab Emirates in November before facing Scotland in the ICC InterContinental Cup at the end of the year.

“We will be conducting a global search in an effort to make certain we get the right candidate for the head coach role,” said Holdsworth.

“We hope to have the successful applicant in place for the tour to the UAE in late November, so they can take over the reins from John at the conclusion of the ICC InterContinental Cup game against Scotland.

“We’re looking for a coach with a broad spectrum of skills, who is an accomplished strategist with clear and ambitious plans as to how they will develop and build further success for Irish cricket.

“They will need to demonstrate that they can create a winning culture and mindset in all forms of the game, capable of beating other full-member countries.”

Ireland face a 50-over World Cup qualifier in the first half of 2018, followed by a global Twenty20 qualification tournament in either late 2019 or early 2020.

1 Golf clubs waiting to hear if they can stay open under Level 5
2 Johnny Sexton aware of how Ireland can offer fans an escape
3 Extremes of sweet and sour for Solskjaer as Man United show signs of revival
4 Gerry Thornley: After 32 weeks the Six Nations is back up for grabs
5 Arsène Wenger: Arsenal was a matter of life and death to me
Real news has value SUBSCRIBE