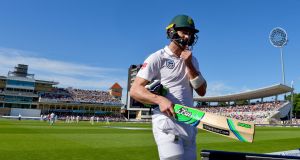 South Africa captain Faf du Plessis leaves the field after losing his wicket for 63 during play on the third day of the second Test match between England and South Africa at Trent Bridge. Photograph: Getty Images

We know the equation now. And we think we know the outcome. England need 474 runs to win and they have two days and 10 wickets in hand to do it. The highest target they have ever chased successfully in a Test match is 332 and that was in Melbourne in 1928.

Hence there is not much cause for optimism in the England camp except that a victory for them is more likely than a drawn game since there is so much time left and the weather seems set fair. Moreover modern players seldom dwell too much on ancient history and even if they do the appropriate response is that “records are there to be broken”.

Faf du Plessis and his side displayed a pragmatism which is less prevalent in Test cricket in the 21st century. He recognised that his team was in charge at the start of play and there was a determination to make sure that this state of affairs should be consolidated. Somehow there was something familiar about the situation in which South Africa’s DuP found himself: a sudden collapse in middle England created an unexpected bonus and he was in a position to dictate terms. Du Plessis and his colleagues were not going to squander such an opportunity.

So South Africa took their time even with the ballast of a lead of 205 at the start of play. Dean Elgar was hardly in his pomp but in these circumstances he was content to grind his way to 80. Hashim Amla delivered an innings of 87 more notable for its hair-shirt self-denial than silky strokeplay while Du Plessis was massively resolute until he received a scuttler from Ben Stokes, which on reflection he might have been glad to receive. He would welcome more misbehaviour from this pitch on Monday.

After the 15 wickets of Saturday, there were just eight on Sunday. The simple explanation was that there was more application from the batsmen and more sunshine from the sky. England also missed a couple of chances in the morning. The first one, unusually, came from a failure to review by Stuart Broad when Amla, on 25, was on strike. There was a half-hearted, quizzical appeal for a caught behind, the sort that are never granted, and no great enthusiasm to seek guidance from the third umpire. The replays suggested a little nick.

More routinely Elgar on 55 sliced a drive off Broad and the ball flew towards gully, where Anderson took off and stuck out a hand but the ball merely brushed his fingers. Thereafter this pair dutifully ground out runs against the seamers.

For Elgar elegance is not the prime consideration. Against the quicker bowlers he seems to plant his feet in the same place come what may and from there he attempts to hit the ball. This may not be ideal and it can lead to the odd contortion never seen in the coaching manual but he is watchful and fiercely determined.

Meanwhile Amla was minded not to play the hook shot, which caused his dismissal in the first innings and he was content to defend and deflect against the pacemen. It was rather different when Joe Root introduced his “first” spinner, Liam Dawson. Sensing his chance Amla took 20 runs from two overs against the left-armer with a succession of crisp drives.

Having added 135 together Elgar departed after being surprised by the pace of a Stokes bouncer. Anderson was summoned up and immediately removed Quinton de Kock caught behind. But then the coalition of Amla and the DuP was harmonious and fruitful. They did not rush when Stokes and Anderson reunited after lunch but when Dawson was recalled Amla scented the possibilities of accelerating.

He hit a fizzing straight drive over mid-off; then he opted for a flick through midwicket, whereupon to almost universal surprise he missed the ball, which struck his front pad. England’s review was justified and the far-fetched notion that Amla has become Dawson’s bunny was resurrected (well, he has dismissed him twice in the series now).

Du Plessis ploughed on and may have been disappointed when Temba Bavuma holed out to mid-off just before the second new ball was due. After tea the South African captain fell to the grubber and then with the lead beyond 400 Moeen picked up three more wickets as the batsmen started swinging.

So at last there was respite for England’s bowlers. The glummest, though that is not his nature, was probably Mark Wood. He did not bowl poorly, but there was no penetration and he has been hindered by a bruised heel. So far in the series he has bowled 56 overs for the solitary wicket of JP Duminy at Lord’s. They might consider an alternative at The Oval. Chris Woakes will not be ready but Jake Ball is expected to play for Nottinghamshire later this week, while Toby Roland-Jones has been in both squads so far.

South Africa declared on 343 for nine, leaving England 15 minutes to bat. It was not a comfortable experience. Umpire Reiffel fired at Alastair Cook when Morne Morkel’s first ball thudded into the back pad. Cook, trying his best to look calm, immediately reviewed and soon discovered that the ball, while straight, was fractionally too high. In four overs England were able to reduce the target by one run – a leg bye. More importantly they kept all their wickets intact.