AIBA president set to be forced out amid financial turmoil 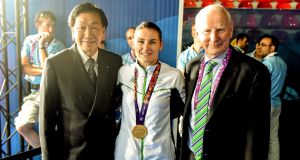 The president of amateur boxing’s governing body, Aiba, is set to be ousted from his position with instability and financial turmoil growing at the organisation.

It is the latest in a long line of controversies going back to the dubious decisions at last year’s Rio Olympics, one of which saw Ireland’s Michael Conlan claiming he had been “robbed” in his fight with the Russian Vladimir Nikitin.

Wu Ching-kuo will be asked to step down after 13 members voted to pass a motion of no confidence in the president with a further two abstaining from voting at a meeting of executive committee members in Moscow on Monday. There will also be an extraordinary congress in the coming months where Wu will be asked to explain alleged financial irregularities at the organisation, concerns first raised by individuals speaking to the Guardian newspaper.

A senior figure in the organisation said: “There will be an extraordinary congress in the next few months with all the national federations present. This will address three agenda items. One is that the president explain the financial irregularities. The executive committee will also be presenting our concerns and the third is a no-confidence vote in the president.

“The majority of the executive committee have just had enough and we’ve got to correct what has gone on. It’s not something that’s happened overnight. It’s been going on for a long time and enough is enough. Major changes are needed and there is more to come. It’s poor governance and it’s pretty much become a one-man show with a couple of staff.”

It follows claims made by another senior figure in the organisation that Aiba faces the risk of bankruptcy after demands it immediately pays back millions of pounds in loans and investments it does not have. There is a deep schism in Aiba with two officials having resigned after claims they were sidelined by the president. Another executive committee member was also removed by Wu after raising questions about possible “deficiencies and irregularities” in Aiba’s finance and governance – before being dramatically reinstated by Swiss courts this week.