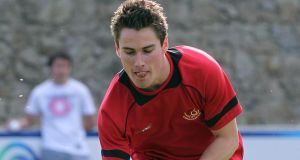 Davy Carson’s late goal earned a new-look Ireland an encouraging 1-1 against world number eight side Spain as Mick McKinnon handed out eight international debuts in his first game in charge.

It was Ireland’s first international match since August’s European Championship 4-0 defeat to Spain. Despite including so many debutants, Ireland battled hard while David Fitzgerald put in a fine performance between the posts. Michael Robson, Harry Spain, Ross Canning, Stephen Brownlow, James Corry, Nick Burns, Mark Loughrey and Richie Shaw were the newcomers.

Fitzgerald denied David Alegre in the sixth minute before keeping out a quick duo of penalty corners. European Hall of Famer Santi Freixa fired a good chance wide while a penalty stroke was also not completed. Spain hit the front with a thumping reverse in the 46th minute from Alex Casasayas.

Ireland got their equaliser, though, when Gary Shaw was released down the wing and picked out Carson who dragged the ball past goalkeeper Quico Cortes.

Locally, Three Rock Rovers were held to a 4-4 draw by Railway Union, having led 4-1 at half-time. Goals from Mitch Darling, Huub de With, Jonny Bruton and Harry Morris put them into a strong position.

But Railway fought back with Mark English scoring the equaliser in the last minute.

With Monkstown winning 7-1 against Rathgar, it reduces Rovers’ lead at the top to two points. YMCA eased any relegation doubts with a 1-0 win over Fingal – Dash Hewett scrambled home the winner with four minutes remaining.