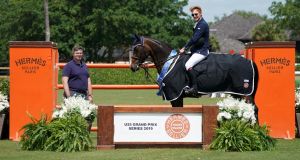 Daniel Coyle and CHS Krooze in their winning presentation in Florida. Photograph: Sportfot

Week 11 of 12 of the Winter Equestrian Festival in Wellington, Florida concluded with a win for Ireland’s Daniel Coyle in Sunday’s £50,000 Hermès Under 25s’ Grand Prix final.

There were 30 starters in this eighth and final round of the Hermès Under 25s’ series and Derry native Coyle, who is senior rider for Lothlorien Farms in Canada, was one of six competitors who went clear over the first-round track designed by Germany’s Olaf Petersen Jr.

Against the clock, Belgium’s Zoe Conter held the lead on the 11-year-old Selle Francais stallion Univers du Vinnebus (43.52) until Coyle, who was last to jump, comfortably took command with his own Irish Sport Horse mare CHS Krooze (39.83). Canada’s Alexanne Thibault finished third having recorded the only other second round clear on Chacco Prime (44.70).

“This is my last year in the Under 25 and I think the series has been incredible for me,” said Coyle who started competing in the Hermès Under 25 Grand Prix Series four years ago. “Experiencing this format is a real help for when we’re older.”

The 24-year-old got the ride on CHS Krooze in December after bringing the mount over from Ireland. He commented: “I didn’t expect her to be at this level already and that just proves that the Under 25 is a real good series for the horses as well.”

Of Petersen’s track, Coyle said, “For me, the toughest thing today was that it was a long way around with a 96-second time allowed. It’s not very often that that happens. I didn’t get to see any of the jump-off, but I was told it was very fast. I have also been told my horse is very fast and we found that to be true today.”

Sourced by Coyle through her previous rider Peter Smyth, CHS Krooze is a nine-year-old mare by Kroongraff. She was bred in Co Clare by Vincent O’Callaghan out of the Cruising mare, Cruise Oak.

In the 1.60m Grand Prix in the grass Derby field at the Palm Beach Equestrian Center, Lorcan Gallagher had a fence down in the second round with the Dacantos Group’s Hunters Conlypso II. The Co Down rider had to settle for fifth place as Denmark’s Emil Hallundbaek claimed the class with the faster of two second round clears on Chalisco.

Irish show jumping riders were also in action throughout Europe over the weekend with the best result coming on Sunday at Vejer de la Frontera in Spain where the top three places in the four-star Longines 1.55m Grand Prix were filled by riders from this country.

From a starting line-up of 50, 11 competitors progressed to the second round where the fastest of three double clears was recorded by the recently-formed combination of Waterford’s Peter Moloney (28) riding Team Harmony Management’s 14-year-old Holstein mare Ornellaia (47.08).

Moloney’s cousin Anthony Condon slotted into second place with the 13-year-old stallion SFS Aristio (47.20), which the rider owns in partnership with John Hales, while Kilkenny’s Susan Fitzpatrick finished third on her mother Sharon’s Fellow Castlefield having posted the only other double clear in 47.52.

Ireland was also represented in the Under 25s’ classes at the French venue with Sofie Slattery (Valentine du Bois Pinchet) and Anna Carway (Ajaccio) finishing sixth of 10 in Sunday’s team competition. Tynagh-born, Belgium-based Slattery finished in the top six on all three days of the show with Ecurie Dehalais’s 14-year-old bay mare.

The 2019 national eventing season commenced on Saturday with the Lightsource BP one-day event at Tyrella House in Co Down where the honours in the top-rated EI115 (Open) class went to Stephanie Stammschroer.

The 19-year-old Co Meath rider completed on her dressage score of 27.5 penalties with her mother Paula’s Master Swatch, the 2009 Watermill Swatch gelding on which she has represented Ireland at Junior and Young Rider European championships in the past two seasons.

Locally-based Joseph Murphy had a fence down show jumping to finish second on Gorsehill Pearl (28.6) while Carlow’s Sam Watson, who was on Ireland’s silver medal-winning team at last year’s World Equestrian Games in North Carolina, left two of the coloured poles on the floor as he filled third place with Imperial Sky (31.4).

With Sportsfield Othello, on which he finished ninth (34.8) on Saturday, Murphy is one of six Irish riders who hold a confirmed entry for the Badminton horse trials in early May. The others are Devon-based Padraig McCarthy with Mr Chunky (on which he won team and individual silver at WEG last September), Clare Abbott (Euro Prince), Sian Coleman (Kilroe Hero), Ciaran Glynn (November Night) and Jim Newsam (Magennis). Michael Ryan (Dunlough Striker) is the sole Irish rider on the wait list.

In dressage, Ireland’s Anna Merveldt secured a podium finish on the final day of the CDI 3* show in Ornago, Italy when scoring 69.650 per cent with Forget Me Not 2 for third place in Sunday’s Intermédiaire I freestyle to music class.

Ornago proved to be a good show for the Irish duo of Merveldt and James Connor. Dual Olympian Merveldt was fifth in the Prix St-Georges class and fourth in the Intermédiaire I class with the 15-year-old Deutsches Sportpferd gelding Forget Me Not 2 while she and the 10-year-old Lusitano gelding Esporim placed ninth in both the Grand Prix and Grand Prix Special big tour classes.