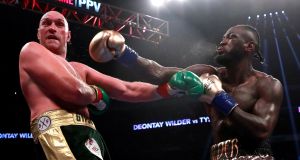 Romeo and Juliet had an easier time getting together than Anthony Joshua and Tyson Fury have experienced lately. The courting of the voluble Gypsy King as the perfect ticket-selling foil for the sweet-talking triple-belt world heavyweight champion continues behind the scenes, while each prepares for marking-time bouts against fighters with clean but thin records.

Yet again boxing fans will miss out on the spectacle they want, as Fury prepares to deliver the obscure young German, Tom Schwarz, his first defeat in 25 bouts when they meet in Las Vegas on June 15th. It will be the Mancunian’s debut for ESPN, after signing a staggering £80m, five-fight deal. Fury told MTK Global: “Vegas next, baby. We want to give the fans something to travel to for an event this summer.”

Ricky Hatton used to get 30,000 fans to some of his Vegas fights; even Fury, a master of self-promotion, will struggle to persuade anywhere near that number to follow him to Nevada. What fans want is a much shorter journey to Wembley or the Principality Stadium.

Joshua’s promoter, Eddie Hearn, made it clear what he thought of that one: Not a lot. Meanwhile, he puts his man in with the undefeated American Jarrell “Big Baby” Miller at Madison Square Garden two Saturdays earlier, on June 1st in the champion’s first fight in America for DAZN, the streaming channel part-funded by the UK billionaire Sir Leonard Blavatnik, born in Odessa with British and American passports to allow easy access to his homes in London and New York. He has accumulated nearly £17 billion, a couple of billion more than the Facebook chief, Mark Zuckerberg, lost in one year.

So, with this sort of money sloshing around, Fury and Joshua will earn well, and for little risk, Fury’s fight decidedly easier than Joshua’s, even though Schwarz somehow is rated number two in the world by the WBO.

However, there are obstacles to their paths crossing sooner rather than later. Bob Arum, whom Warren has worked with amicably enough over many years, is trying to secure his fighter, Kubrat Pulev, his mandated challenge for Joshua’s IBF belt, after the Miller defence.

Pulev stayed in the picture with a rough and tumble, seventh-round stoppage of the Romanian, Bogdan Dinu, on ESPN in California at the weekend – then celebrated by kissing the ringside interviewer, Jenny SuShe, full on the lips.

As bewildered as Dinu had been a little earlier, SuShe smiled and laughed, probably the only option on live TV. She later, though, described the incident as “embarrassing” and a “little strange”, while Pulev was called out for his behaviour on social media.

Dinu, incidentally, could not get past the fourth round in his previous fight – against Miller. Pulev, who is 37 but still dangerous, was coming off a decent win over Fury’s cousin, Hughie, last October.

Nevertheless, the two fights everyone wants involve a mix of three heavyweights: Joshua, Fury and the man he drew with in Los Angeles before Christmas, Deontay Wilder. The business begged for a rematch. Instead, Wilder, a free agent who has turned down $100m for three fights on DAZN, defends his WBC title in Brooklyn on May 18th against Dominic Breazeale.

Breazeale, who talks a great fight, lost in seven rounds against Joshua nearly three years ago. The division seems to be going around in circles. Warren and Hearn, however, could break the deadlock if they could ever agree on the zeroes for their fighters.

The recent suggestion that the promoters could settle their professional rivalry with a little set-to in the ring was, of course, glove in cheek. The odds are any blood spilt would be accidental.

Not that it wouldn’t sell. Promoters are natural magnets for social media critics who like to hurl invective from the safety of an anonymous Twitter handle, and there are plenty who would pay to see their villain of choice take a few. It would not make pay-per-view but they surely could draw a full house to York Hall in Bethnal Green.

What might be equally as entertaining, and altogether safer for two millionaire businessmen, would be a face to face over a table, with Johnny Nelson doing his eye-balling schtick as the moderator. This blog put the idea to Warren once but he wasn’t keen. Unsurprisingly, he would want it screened on his BoxNation channel if it ever did happen, while Hearn probably would no doubt insist Sky show it.

It’s rarely the fighters who are reluctant to get together; it’s nearly always the accountants. – Guardian