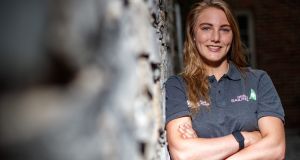 Sailor and mathematics student Aoife Hopkins is hoping to secure an Olympic spot next month, but first there are a lot of numbers to run. She is recovering from six bouts of tonsillitis in the last year, clocking up 20 credits for this year’s studies at Trinity College Dublin, sailing five days a week, and at the end there’s just one slot. Possibly.

Plus boats eat up money so that number never stops ticking.

From Dublin, Hopkins competes in the single-handed Laser Radial. It’s probably the most well-known boat to non-sailors in Ireland thanks to Annalise Murphy winning a silver medal at the Rio 2016 Games in that event.

Irish sailors are aiming to contest four events at the Tokyo Games: the Laser Redial, 49er, Laser Standard, and Finn. The next few months are crucial for qualification as the team has not yet secured slots; starting with the Genoa World Cup on April 15th.

And in that strange quirk of Olympic sports, Hopkins or her team-mate Aisling Keller can earn the slot for Ireland and will then race against each other to see who travels to Tokyo. The Tipperary woman came second to Hopkins at the U-21 Europeans and the pair regularly train together.

Hopkins says: “I’m competing against the international girls, and against really just one Irish girl at the moment. We train together, we do our entire programme together. We’re great friends, we live together when we’re away and everything. It would be long hard days, so it’s great to have a training partner, we have great goss.”

Hopkins is more experienced than most young sailors at this intense competition, having put in a brave challenge against Murphy before Rio. Aged just 16 at the time, she says no one thought she had a chance but the learning gained over those trials is what is powering her ambition now.

“I was very young, so I was very much the underdog. I’d been training with Annalise, and Rory our coach said it would be great experience. It was a little bit daunting. To say I was going to do Olympic trials consisting of the senior worlds in Mexico, the Brazilian nationals and the Miami World Cup, it was a big thing,” she says.

A big thing in many ways. Hopkins was in fifth year at Santa Sabina school in Sutton and realised it was time to let everyone know where her interests lay.

She made up a colour-coded Excel sheet for her week; marking squares for commuting, eating, sleeping, gym work, sailing, the school day and homework. She took this to a meeting between her teachers and sailing coach at the start of the year. She says the spreadsheet was a shock to both sides as neither had understood they were just half of a complex formula.

Looking back at the trials, she says the most important lesson was to trust her instincts.

“There’s a strategy for the race, and what the other boat does doesn’t affect that. So, say Race Two of the Worlds, if I was out on the left-hand side and instead of sailing my own race, I was looking for Annalise. And I’d see her on the right-hand side and go out there to her. I was making a major loss, not for any strategic purpose. You’re going to lose to everyone if you do that, you need to sail your own race,” she says.

Off the water, she’s always looking at costs. At World Championship events, sailors cannot bring their own boats but must rent from the organisers starting at €1,000 for Hopkins’s boat.

Hopkins says a Laser Redial costs somewhere between €7,500 and €8,000 to buy, explaining: “At Aarhus last year, we had a trailer full of boats with us in the car park. But we had to pay. It’s frustrating.”

Then there’s the travel. A typical year means seven or eight overseas trips. Qualifying events for Tokyo take place this year in Italy, France, Greece and a number in Japan.

Since winning the Under-21 European Championships in 2017, Hopkins has qualified for Sport Ireland funding at international level. That’s €12,000 for this year and next. She gets support from the Irish Sailing Association for strength and conditioning and coaching.

Sponsors including Mercedes-Benz and Euro Car Parks help keep the show going. And one key private sponsor; the bank of Mum and Dad. Hopkins references her family’s support constantly as she talks, explaining her mother went back to work full-time to help fund Hopkins’s sailing trips.

“When I was nine, they sent me down to Howth Sailing Club, a sort of glorified babysitting I suppose but here I am. The Under-21 Europeans was two weeks after the Leaving Cert, and it was my opportunity to show people that I did both. Some people were saying I was crazy; my family supported me. So that month I was basically saying to people ‘well, I’ve pulled it off’,” Hopkins says.

Studying at Trinity College on a sports scholarship, she’s scaled down her school work for this year. But exams still have to fit around sailing on Dublin Bay from Monday to Friday, with strength work at Sport Med Ireland and biking added to the mix.

Laughing she says some people think sailing is something you do in the Greek Islands with a champagne glass in hand, but she’s usually wet and frozen to the bone. That caused problems last year when she came down with tonsillitis and couldn’t kick it, eventually needing 10 courses of antibiotics.

“For sailing you have to build up fitness before you can get back to the boat. It’s really easy to injure yourself if you lack core strength. So I was really only back in the boat in January which was frustrating. Sometimes those things are good, you come back so much more hungry than you were before for it,” Hopkins says.

“I’m always grateful and I really do love it. But there’s long days where it’s absolutely howling on the water. You’re on Dublin Bay so it’s a solid two degrees and you’ve a gym session later. You have to be ready for it.”

Gym includes a heavy focus on quads and core-strength with squats, box-jumps, rowing and practice for “hiking.” Hiking while sailing is about as far from a gentle stroll in the hills as you can get. Sailors lean backwards over the boat, their bottom just above the water with feet anchored inside the boat, and they lean and steer to catch the wind; impossible to do without hours of gym behind you.

And it’s when Hopkins digs into the technicalities of sailing that it becomes clear why she does this. Racing in Genoa means she could land back to Dublin Airport just hours before an exam, but she doesn’t see it as a sacrifice, saying:

“There is something freeing about leaving your phone ashore and going out for two hours in the wind. When I’m on the water I’m very much thinking only about the water. Just the strategy or should I be on the left side of the bay or if someone is going faster than, why are they; all I’m thinking about is sailing,” she says, adding: “I wouldn’t have it any other way.”