Dave Hannigan: Fighter now in grimy netherworld of being famous because he’s famous 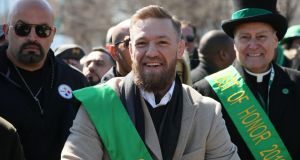 Reams of footage of Conor McGregor’s recent activities are available on social media. Some of if it is the slickly produced promo clips put together by the professional video crew that are always on his arm. More is the shaky, impromptu cinema of passersby and fans. Of the material that has come to light in the past week or so, perhaps the most shocking cameo shows McGregor putting in roadwork, actually clocking up miles on the streets of Miami. It’s startling because, in the chaos and toxicity attending his every move, it’s very easy to forget the Dubliner is an athlete. At least he’s supposed to be.

Two and a half years removed from his last victory in the octagon, the more time passes the more McGregor has crossed over into the grimy netherworld where somebody is famous merely for being famous. The kind of vapid celebrity who turns up to do his community service at a pair of Brooklyn churches, accompanied by bodyguards and an entourage. The last person to be such a diva about fulfilling a court-mandated sentence like that was Naomi Campbell and, in the supermodel’s defence, she never styled herself the toughest man in UFC. And, she didn’t go out and reoffend immediately after doing her time either.

The pair of videos showing McGregor stomping on a mobile phone outside Miami’s Fontainebleau Hotel and then emerging from police custody with his trademark swagger (equal parts perp walk and pimp roll) are telling too. They already look like glimpses from some future documentary about his rise and fall. His lawyers may dismiss the incident as somebody looking for a quick pay day but his temper has placed him in real legal jeopardy again. Since this is not his first offence, it may not be as easy to plea deal his way out, not to mention either that every fresh infraction puts him at risk of compromising his immigration status.

Losing the right to fight in or even to visit the United States would be potentially fatal to McGregor and his burgeoning business interests because, even as his compatriots weary of his offensive act and are repulsed by the welter of rumours surrounding his private life, plenty of people over here are apparently still gullible enough to buy his tiresome schtick. Witness the events of last weekend when we learned the hard way that no dating algorithm could ever come up with a match more perfect than McGregor and the March 17th festivities in America.

As Leo Varadkar must have noticed in Chicago, the chest-thumping loudmouth with a history of homophobic slurs and racist epithets is far more in tune with the antediluvian types who turn out for and run these parades than a gay Taoiseach trying to project an image of a modern progressive Ireland. Truly, St Patrick’s Day and McGregor were made for each other.

They both revel in ill-defined, unbearably loud and garish versions of Irishness, their cartoonishly offensive personas hallmarked by faux patriotism, a questionable grasp of history and a desire to persuade others that drink is somehow part of our genetic programming. At the Boston parade last Sunday, which he called “the perfect ending to the wildest Paddy’s week I have ever had in my life!”, he was being driven in a Proper 12 vehicle from which he flung baseball caps promoting the whiskey into the crowd.

Every now and again, he paused to emit his trademark cackle. Justifiably. He is laughing all the way to the bank. The denizens of South Boston were so smitten by his presence that they eventually swarmed his car and police asked him to leave the parade. Further proof that his errant behaviour scarcely affects his business model, incidents of thuggery enhancing rather than damaging his brand in these parts. Corporations like Monster Energy and Reebok are paying big money to be associated with these unhinged outbreaks of violence because they are desperate for the reflected edginess. At least until he’s no longer allowed into the country or gets charged with something more serious, some place.

In the meantime, he’s giving it the hard sell at every turn. The bizarre appearance at the Super Bowl in Atlanta last month, wearing matching outfits with his son, was designed to promote his forthcoming suit collection. The shadow boxing for a bag-piper at a Chicago off-licence (well, super-sized liquor store) the other day was all about flogging whiskey. Wherever he goes, there always seems to be a supply of gormless idiots overly impressed by his antics. Against that background, it’s easy to see then why he could, this week, despite the lack of victories in recent years, brazenly repeat his demand for shares in the UFC.

He might be overselling himself with that one, just like he did when delivering a David Brent-style pre-match speech in the Boston Bruins locker room last Saturday night. The most excruciating aspect of that entire cringe-fest was when he warned Zdeno Chara, the team captain, that he must win the puck when McGregor drops it. Originally from Slovakia, Chara is a 41-year-old veteran of 1500 NHL games, a tireless charity worker who speaks six languages, advocates for gay rights, and is regarded as the consummate professional by his peers. A character who will be remembered and beloved in Boston long after the logo fades from the discarded Proper 12 baseball caps.