Defeat for Steve Smith on IPL return from ball-tampering ban 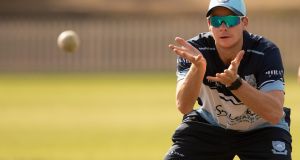 Former Australia captain Steve Smith scored 20 off 16 balls on his return to the Indian Premier League but failed to inspire Rajasthan Royals to victory over Kings XI Punjab on Monday.

Smith missed last year’s IPL after getting a 12-month ban from international cricket for his role in Australia’s ball-tampering scandal during a test match in South Africa.

Hoping to earn a place in Australia’s World Cup squad, Smith made a cautious start in Jaipur but soon found his groove and hit Punjab’s Sam Curran for two boundaries, including a flick over square leg for six.

The 29-year-old escaped a close lbw shout in Curran’s next over but was dismissed two balls later when he was caught by Lokesh Rahul on the long-off boundary.

Rajasthan lost six more wickets in the next 16 deliveries to finish on 170-9, 14 runs short of Punjab’s total.

Smith and former Australia vice-captain David Warner are eligible to return to international cricket when their bans end on March 28th. They were left out of Australia’s squad for the current one-day series against Pakistan.

The World Cup in England and Wales starts on May 30th.

Elsewhere blistering Jos Buttler innings came to an end in controversial fashion in his first IPL appearance of the season.

England batsman Buttler registered his sixth half-century for Rajasthan Royals as they chased Kings XI Punjab’s total of 184 for four in Mohali.

The 28-year-old had reached 69 off 43 balls when he was ‘mankaded’ by India bowler Ravichandran Ashwin.

With Buttler at the non-striker’s end and marginally out of his crease, KXIP captain Ashwin — who had run in to bowl — stopped and whipped off the bails.

It was a legal dismissal but one seen by many as going against the spirit of the game.

The incident was all the more contentious as Buttler was in his crease when Ashwin arrived, only for the bowler to pull out of his action and wait for him to step forward.

Ashwin defended his actions after the match, telling Star Gold: “It was pretty instinctive. I actually didn’t even load. He left the crease, that’s it.

“That’s always been my take on it because that’s my half of the crease.”

Buttler was clearly furious as he walked back to the pavillion while players, pundits and viewers waded in on social media.

England one-day captain Eoin Morgan wrote on Twitter: “I can’t believe what I’m seeing!! IPL Terrible example to set for young kids coming through. In time I think Ashwin will regret that.”