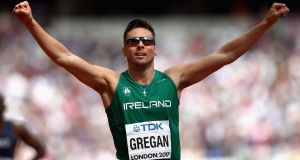 Ireland’s Brian Gregan celebrates after finishing third in the heats of the 400m at World Athletics Championships in London. Photograph: Patrick Smith/Getty Images

For a self-confessed night owl everything about the way Brian Gregan ran his 400m heat inside the Olympic Stadium this morning was perfectly timed – his determined effort and calm execution securing him automatic qualification for the semi-finals.

This, remember, in one of the most deeply competitive events on the track this week.

Only the top three in each of the six heats went through, and Gregan nailed third with room to spare – his 45.37 seconds the second fastest time of his career. He’s out again on Sunday evening (7.40pm) knowing sub-45 will probably be required to make the final, but he’s in with a chance and that’s good enough for now.

“The heats have been pretty rapid. And I actually didn’t feel amazing, but knew with 150m to go I’d be really strong. That was the whole game plan, wait until 80m to go, come through, and it played out exactly the way I wanted it to play. I stayed composed, shoulders down. But I never doubted it. Keep going.

“I’ve really got my confidence back this year, motivation to train again, and enjoy it. It’s a tough sport when you’re not enjoying it.

“Then when you walk out in front of a crowd like that it’s worth every hard day. I’ve never experienced anything like that in my life. And may never experience it again. A packed stadium for a morning session, what 50,000 people? Everything from here is a bonus.”

“It’s my third World Championships now, so I have the experience, know what I have to do,” added the Clonliffe Harriers man. “I was ranked sixth on personal bests, finished third. There’s no point running anyone else’s race. I did my own thing, and it’s paid dividends.

“I’m also rooming with Thomas Barr, and we’re having the craic, enjoying it, and I woke up this morning thinking ‘oh yeah, I’m running the World Championships today’. Obviously once we get on that track we’re very serious, but we’re enjoying it, and that’s half the battle.”

Indeed coming into the homestretch, Gregan was only fifth, seemingly under pressure: he finished as fast as anyone and with that was soon safe in third. So, can he go faster in the semi-final, dream of the big one?

The pressure was on in another way too after Ciara Mageean’s self-confessed “disaster” in her 1,500m heat on Friday, when she finished last: Gregan knows the feeling having had some under par runs on the big stage before, knowing too the importance of not letting those days stick for long.

“Of course, we’re all for team Ireland. But we’re our own team too, and yeah I was surprised for Ciara. She looked good, has been in great form, but sometimes when you don’t have it, you don’t have it.”

Morning or evening running doesn’t seem to matter to Wayde Van Niekerk of South Africa as he cruised through his heat in 45.28, the world record holder from Rio on course to complete a 200m/400m double. Isaac Makwala of Botswana, who will certainly test Van Niekerk when it comes down to the final, was the fastest qualifier with his 44.55, one of seven men to run under 45 seconds across the six heats.

Not bad at all for a morning session on the track.

No such joy for Mark English. His preparations coming into London were far from ideal – on a few levels – and his lack of racing due to injury certainly appeared to catch up with him in his 800m heat, his fifth-place finish in 1:48.01 well short of qualification.

“Fifth place is not what I wanted,” he said despondently. “But I knew it would be a tough race, would come to a sprint, because there were no front runners in it. My plan was just to make sure I had something left for the last 200m, but didn’t have enough today, unfortunately.

“I haven’t had that same sharpness as last year, maybe the year before, and that’s what happens when you get an interrupted season. I’ve a nerve injury, and your legs need blood and nerve supply, and if any of those are compromised, but . . . I had to go out there and give it a shot. But I’ll get back and get ready for the next season.”

Only the top three were sure to progress, and up against English was title favourite Nijel Amos from Botswana, who won the heat in 1:47.10, actually the slowest of the lot: Pierre-Ambroise from France and Adam Kszczot from Poland, both of whom have run 1:43 or quicker, took the next two automatic spots.

A faster race would have suited English, but still his lack of race practice because of the injury seemed to impact on his confidence too.

“It was kind of a chronic issue. I was still able to train through it, but it was taking away from the quality, which is nearly more frustrating in some way. You can’t just rest and recover, you have to keep going. That’s the fine line athletes tread between success and getting injured and falling down the other side.”

1 Saracens to accept second 35-point deduction and effective relegation
2 Welcome to Iten in Kenya – home of champions and cheats
3 How do Klopp’s Liverpool measure up against greats of past?
4 TJ Reid reveals the fresh secrets of his consistency
5 Shane Lowry’s Abu Dhabi defence crumbles in the sand
Real news has value SUBSCRIBE