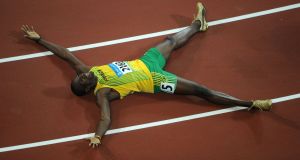 They say every generation throws a superstar up the pop charts. An Ali. Pele. And just like that a Usain Bolt.

Unlike most people, not everything about seeing Bolt run for the first time blew me away. And I can remember exactly where it was and what I was doing.

A rainy evening in Helsinki, at the 2005 World Championships, the 200m final where American sprinters finished one-through-four. And while trying to write some sense into that (Justin Gatlin winning, previously banned for a doping offence?) noticed Bolt had finished last. At age 18 and obviously carrying some injury, he still didn’t present himself as the new athletics superstar.

Not everything about seeing Bolt run for the second time blew me away either.

A hot night in Osaka, at the 2007 World Championships, the 200m final where American Tyson Gay completed a sprint double. And while trying to write some sense into that (Gay double, might that be lost in translation?) noticed Bolt had finished second. Fulfilling some of that promise, maybe.

Then the third time Bolt blew everyone away, starting with the other seven men in the 100m final at the Beijing Olympics in 2008. Suddenly it seemed everything made sense – all the fears about the smog and the transport and the limited internet connection disappearing the moment Bolt walked into the press conference room under the Bird’s Nest stadium, about an hour after winning in a then world record of 9.69 seconds.

Still 21, his personality alone owned the room that night, his energy like loose electricity. Four days later he won another gold medal in the 200m, breaking Michael Johnson’s world record, and two days after that won a third gold with Jamaica in the 4x100m. He became only the fourth man in Olympic history to win all three sprint titles, the first to do so in all world record times.

And just like that athletics had its new superstar.

That the credibility of 100m sprinting at the time was hovering somewhere below zero hardly mattered (US sprinter Marion Jones spent that summer of 2008 in a Texas federal prison for lying about her steroid use): Bolt came across as a freak of nature and even in a race of just 100 metres, taking just over 40 strides and lasting just under 10 seconds, was in a league of his own.

The fourth time seeing Bolt run blew my mind. The 2009 World Championships in Berlin raised the bar in a few events, only nothing like Bolt’s 9.58 for the 100m, followed by his 19.19 for the 200m – his two world records which still stand. Any last doubt he wasn’t yet the superstar disappeared when he showed up later in the week at a Reggae club, somewhere down beside the old Berlin Wall, shirt off and spinning tracks of a different sort.

By then the only person who could beat Bolt was himself – which is exactly what happened next, at the 2011 World Championships in Daegu, when he false-started in the 100m final. That remains his sole championship “defeat”, and he’s won a sprint triple at every major championship since, including last summer’s Rio Olympics.

Not long after that Bolt also found himself turning from superstar to saviour – his showdown with Gatlin at the last World Championships in Beijing described by some as the race between good and evil, by others as the hero against the villain, or else simply the showdown between the clean and the dirty, the truth and the lies. If only modern sport was that black and white.

It’s still hard to imagine what the reaction would have been had Gatlin won, the then 33-year-old American, nearly 10 years on from committing a second doping offence, getting faster all the time.

That Bolt won it – by a mere .01 of a second, remember – may have temporarily saved the sport, brought some a sort of salvation from the needle and the damage done, but it’s taken some further battering in the two years since, particularly with all that happened in Russia.

“Hopefully, athletes will see what’s going on and understand that if they don’t stop what they’re doing the sport will die,” Bolt said on his arrival in London this week. “And hopefully they will understand what the sport is going through and what they need to do as athletes to help it move forward.”

Now he’s back in the London Olympic Stadium, a few weeks shy of 31, his final championship appearance. What Bolt still has going for him more than any other world-beating sprinter of his generation is his untarnished anti-doping record, which may not actually carry as much weight as it once did, although it’s a good place to start.

It doesn’t entirely remove him from that still worrying backdrop of Jamaica’s anti-doping record, particularly the gaping absence of out-of-competition testing in the five months prior to the London Olympics, which resulted in the resignation of their anti-doping chief.

Jamaican sprinters went on to win eight of the 12 individual sprint medals available in London, and the following year, five of their top sprinters tested positive – including former 100m world record holder Asafa Powell and double Olympic 200m champion Veronica Campbell-Brown. Bolt has also since lost the gold medal he won with the Jamaican 4x100m relay team in Beijing, after the recent retesting of samples, carried out by the IOC, found that team member Nester Carter should have been originally expelled after testing positive for the banned stimulant MHA.

Every other sprinter who has run 9.79 seconds or faster has some sort of doping offence in their past record, namely Gatlin, Powell, Gay and Yohan Blake; and of the 30 fastest men’s 100m times ever, only nine have been run by an athlete not banned for drugs, and all nine belong to Bolt.

That Bolt is still the athlete to beat in London also sets his record apart. No modern sprinter has remained on top of this game for so long. Rivals have come and gone, so too most of the suspicions that no man could run 9.58 on talent and hard work alone. No modern sprinter will ever entirely escape those suspicions but Bolt has at least made it to the finish line.

Although there’s no doubt he’s slowing down. His 9.81 in Rio was the slowest of his Olympic titles. Gatlin, now 35, doesn’t appear to have the legs anymore. Canada’s Andre De Grasse, at 22, was to be the closest challenge but withdrew on Thursday with a hamstring injury. The young American Christian Coleman will give him a race but is not yet in Bolt’s league.

So he’ll go out on top, winning his seventh global 100m title. But there’s a reason Bolt is not running the 200m as well, his favourite event. That’s already reserved for Wayde van Niekerk, the next athletics superstar?