Mo Farah on track to complete a remarkable hat-trick 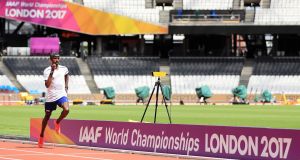 Mo Farah training prior to the World Athletics Championships in London where he will seek to win another 5000/10,000 metre double. Photograph: Richard Heathcote/Getty Images

Catch him if you can. Because whether or not you still believe in athletics magic, the stage is now set for Mo Farah to perform one of the great distance running hat-tricks of our time.

The stars are aligned too, because exactly five years – to the day – after winning his first global 10,000m title, Farah steps back into the London Olympic Stadium seeking to win his last. He will be back next week looking to make it another distance double, but for now this is the only race that counts – the headline act on the opening night of the 16th World Athletics Championships.

After London, or so he says, Farah is finished with the track and will move up the marathon. In front of his home crowd and with all that in mind this is also the one race he won’t want to lose – yet may actually be the hardest to win; at age 34, with countless miles in those legs, Farah must now be considered vulnerable.

Farah’s decision to avoid all media engagements this week may be some reflection of that pressure and expectation, or more likely the fact that no matter how fast or how much further he runs into history these days, he still can’t hide from the suspicions of doping. Nor perhaps can these championships as a whole. More on that to follow.

London is at least likely to be cleaner than championships of the recent past – thanks in no small part to the IAAF’s continued blockade against the Russian Athletics Federation.

No nation sabotaged a major championship quite like the Russians did here in the London Olympics of 2012, and even if they weren’t the only ones at it, their absence here should be duly conspicuous. The final medal table should reflect that.

Irish medal hopes are, even for a team of just 12 athletes (only five on the track, the rest in the walks and marathon) perhaps unduly thin. Thomas Barr, one year on from finishing in the 400m hurdles in Rio, can certainly aspire towards the medal podium, but as hard a task for now is making the final. If anything his event moved on from Rio.

Four years after winning the gold medal in the 50km walk in Moscow, Rob Heffernan is also back with an enduring ambition for medals, but at age 39, although not ancient by race walking standards, his best years may well be behind him. Not that Heffernan will ever give up the fight.

On opening night, however, there is only one gold medal on offer – and Farah will be running the 25 laps for nothing less.

In other words, double gold over 5,000m/10,000m at four straight global championships – something no athlete has achieved before or likely will again. It’s the most stunning streak even in the deep distance running annals of Nurmi, Zatopek, Viren, Gebrselaisse, Bekele, etc.

The last 10,000m race Farah lost was at the 2011 World Championships in Daegu, South Korea, when he was gunned down in the closing strides of the 10,000m by Ethiopia’s Ibrahim Jeilan, after what looked like a slight tactical miscalculation more than anything else.

Farah came out later in the week and won the 5,000m, and hasn’t lost a championship race since. Yet therein lies part of the problem, because that 2011 breakthrough happened to coincide with his move to the US to train under Alberto Salazar, no stranger to doping allegations.

And since then, while continuing to produce unbreakable displays of distance running, Farah has also been associated with Jama Aden, the Somalian-born, Ethiopian-based coach who was arrested by Spanish police last summer for possessing an array of performance-enhancing drugs.

Then last month documents leaked by the Russian hackers Fancy Bears included Farah’s name in a list of athletes flagged by the IAAF for suspicious biological passports: “Likely doping,” read the notation from a test on Farah dated November 23rd, 2015. Although apparently based on the results of testing over an extended period of time, a second database leaked by Fancy Bears, attached to an email dated April 2016, then record Farah’s test as “now flagged as normal”.

No normal athlete – in the original meaning of that word – wins three World 10,000m titles in succession, and on that note, Farah will need to produce something beyond that.

The Ethiopian challenge isn’t as strong as other years but Kenya’s Geoffrey Kamworor, second to Farah two years ago, and team-mate Paul Tanui, second in Rio last summer, are both gunning for him. The third Kenya, Bedan Karoki, may sacrifice his chances to make it a true run race, because their best if not only hope of beating Farah is to burn him off.

Kamworor is also claiming he can close with a 52-second last lap, and if that’s true, Farah will definitely need to produce something magical. Catch him if you can (10,000m final: Friday, 9.20pm).