English capital, like athletics, was always close to the heart of the great Kerry writer 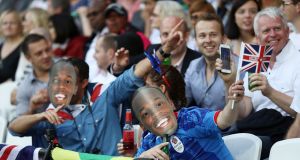 Supporters are pictured in Usain Bolt masks during day one of the 16th IAAF World Athletics Championships London 2017 at The London Stadium Photograph: Patrick Smith/Getty Images

One of the last things Con Houlihan said to me before departing this mortal world was that London had always been his second favourite city. The first, incidentally, was Castle Island. (Con always insisted on that spelling of his native place.) Paris was a close third.

Con often talked about London on those rare and special evenings at what he called his harbour in Portobello. Events invariably began with Con pulling out an old €20 note from under the telephone next to his soft white chair and politely insisting I go round the corner to Spar and purchase two bottles of Yellow Tail, describing it as “easily drinkable”, which believe me it most certainly is.

Then out came my Spanish guitar.

He did occasionally call for an intermission and served up mugs of Barry’s tea or small thimbles of Courvoisier cognac, during which time he’d get a little more reflective. Tales of London were never far from his mind.

Like the time he first visited, on what Con described as a sort of pilgrimage, the spiritual home of the famous weekly magazine called The Champion. It was printed in Farringdon Street, he said, a narrow thoroughfare where Central London hasn’t quite ended and where East London hasn’t quite begun.

The Holy Father had yet to visit Ireland and kneel down and kiss the tarmac – but on that day long ago he felt like making a similar gesture.

Afterwards he adjourned to The Kings and Keys; if you suspect this was a public house, you are absolutely correct. Con loved playing around with words like ‘adjourned’.

“And you thought it was only parliaments and county councils and courts that adjourned; in fact, any layman or woman can do it.”

Some years later he was back in London for the meeting of England and the Republic of Ireland at Wembley, his first mission abroad for The Evening Press, apart from a National League game between Roscommon and Dublin in Dr Hyde Park on a wet Sunday in the previous November.

Ray Wilkins seemed to be clean through to score the winner only for a young man named David O’Leary, who “saved the day with a clawing tackle”, according to Peter Byrne, formerly of this newspaper.

“In fact, he saved the night,” said Con, “but I wouldn’t quibble with the man from The Irish Times, that last bastion of the semicolon.”

Those were the days, he said, in the immortal words of Thomas Wolfe: “We were young and we would never die.”

Con came directly to mind walking into the London Olympic Stadium on Friday morning, in the calm wonder of where the years had gone. It was here, exactly five years ago, on the opening morning of the athletics competition at the 2012 London Olympics, that we heard the news. Oh boy.

The last time we spoke he’d been recounting a few tales of his own Olympic experiences, including Barcelona 1992, when in the sweltering heat and dressed in trademark jumper and anorak, he began walking up Montjuïc to get a closer view of the men’s marathon.

“Then The Wall hit me,” he said, “and it never recovered.”

Con’s love of distance running never left him either, even when not everything seemed above board. He had a kinship with the 100m too, although he reckoned the only tactic involved was the same tactic used to run away from a bull.

I borrowed that line a couple of nights later, when Usain Bolt defended his 2012 Olympic 100m title on this same track, and I’ve got another of Con’s lines in mind if Bolt wins another World Championship 100m in London this Saturday night.

Running, Con said, despite all the scientific intervention, would always be the purest of sports. Not just for human beings: dogs like to race each other, so do horses. And so, surprisingly, do pigs, when they’re very young. And so of course do fox cubs.

He also knew well about the use of drugs, and believed athletes would always seek ways to improve performance. Only the scientists and chemists would soon give way to psychologists, and there is nothing the authorities can do about it. And on that he might also prove ahead of his time.

Many of Con’s favourite things were “not fashionable”, as he’d say himself, and obviously not just in the dress sense.

Even as athletics slipped in and out of fashion he always stood up for me, like Johnny Cash did the young folksinger, or like when the bottles of Yellow Tail were empty, promising the ghost of John Millington Synge would steer me safely back home to the Dublin Mountains. Them, as Confucius used to say, were the days, and the nights were even better.

London, with the possible exception of Castle Island, or indeed Burgh Quay, was also where Con found himself most at home as a writer. He recalled many experiences of the old Fleet Street while it still retained a vestige of honour and felt like the centre of the universe. By that he also meant the last place of refuge against the bruising and battering of words.

Nothing dismayed Con more than the gradual decline of the English language, especially in his later years. Even in his early days with The Kerryman the signs were there, when he once heard a certain sports reporter say to the editor, Séamus McConville: “You are capable of thinking that a colon is part of your backside”.

This is right up there with some of Con’s own immortal words, “that a man who will misuse an apostrophe is capable of anything”.

He hated most abbreviations, blaming their existence on laziness – except for ‘bike’, which at the same time conveyed both the hardiness and swiftness of the bicycle.

In his later years Con also carried a ‘mobile’ phone, another word he considered lazy. “The phone doesn’t move by itself, though sometimes I wish that it would. ‘Portable’ is surely a better word.”

And I can see Con shrugging his great big shoulders at the futility of all that, calling for a top up of Yellow Tail, and asking me who I thought was going to win the 1,500m in London.