Star-studded field makes Women’s 1,500m one of the most competitive events of all 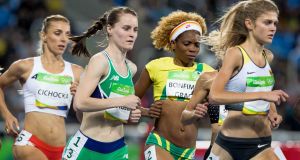 Ciara Mageean: will have learnt a lot from competing at the Rio Olympics. Photograph: Morgan Treacy/Inpho

Because of all the events requiring a depth of championship experience in London over the coming 10 days – and there are many – Mageean is going straight into the thick of them. Three races, in four days, and that’s presuming everything goes perfectly to plan in making that women’s 1,500m final.

This time last year, Mageean ran one of her finest championship races in the heats of the 1,500m at the Rio Olympics; perfectly positioned throughout, she finished a close second to reigning World champion and world record holder Genzebe Dibaba from Ethiopia. Wow, we all thought. Great start.

Then two days later she came out in her semi-final and finished second last, trailed off over the last lap and understandably inconsolable afterwards. This was true championship running, and Mageean had no choice but to learn from it.

Part of the difficulty now, one year on from that experience, is that women’s 1,500m running has also moved on. Not many events in London present a more daunting challenge, a pack of women who have all run under four minutes this summer, with championship medals – not just experience – to boot.

Dibaba is back to defend her title; Kenya’s Rio Olympic champion Faith Kipyegon is there too; Sifan Hassan is World Indoor champion and fastest in the world this year, and Britain’s Laura Muir has to belief to upset them all. That’s just for starters.

Caster Semenya is also intent on claiming an 800m/1,500m double, although her exact ambitions over the longer race remain to be seen. No woman, incidentally, has ever doubled up in those distances at World Championship level, although Britain’s Kelly Holmes did manage it at the 2004 Olympics in Athens.

Ethiopians Gudaf Tsegay and Besu Sado, Kenya’s Winny Chebet, and the fearless German wunderkind Konstanze Klosterhalfen are all capable of winning medals too. Final places will be at an absolute premium.

Unlike in Rio last summer, Mageean doesn’t have the luxury of an extra day’s rest between the heats and semi-finals; after this evening’s heats (7.35pm), the semi-finals take place exactly 24 hours later, the final then set for Monday night.

That first race, therefore – with the first six to qualify, plus the sixth fastest losers – will require all her championship experience. It’s one of the reasons Mageean ran the 800m at the National Championships, at least replicating two races back to back over successive days, although Mageean did find herself under unexpected pressure in the closing strides – Claire Mooney finishing like the proverbial freight train, only to run out of track in the end.

Mageean took the win in 2:04.06, just .17 ahead of Mooney: “I need to be tough like that, work on that finish,” she said, reiterating her intention of making that final, “knowing I’m being part of the best athletes in the world.”

Qualification will require the very best from Mageean, and at age 25 she’s certainly coming into her prime. It will also require an imposing run, getting into a qualifying position early on. When she ran her 1,500m best of 4:01.46 in Paris last summer, two weeks after Rio, she finished ninth; when she ran her mile best of 4:22.40 in London last month she finished seventh.

Times don't matter as much here; It's almost all about position. Since dropping out of the final at the European Indoors in Belgrade last March, Mageean has also been working with sports psychologist Kate Kirby, at the Institute of Sport.

“I know sometimes people see that as a weakness,” she said, “but I’m training my body all the time, and not training my mind. But it’s a big aspect of running, sometimes plays even more of a role. You can always get the training done. But you have those little voices in your head as well, but I’m feeling a lot more confident now.”