With a huge ego and ‘always right’ attitude, New Jersey governor may have found a calling 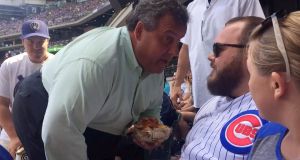 New Jersey governor Chris Christie confronts a Chicago Cubs baseball fan during a game between the Milwaukee Brewers and the Chicago Cubs in Milwaukee. Photograph: WISN-TV/ABC/handout via Reuters

Before the Fourth of July holiday weekend last month, governor Chris Christie ordered all public parks in New Jersey to be shut down as he tried to force the resolution of a budgetary impasse.

That Sunday morning, he and his family fetched up at Island Beach State Park, one of the closed facilities, where they frolicked on an otherwise barren strand. When an enterprising local newspaper flew overhead and snaffled photographs of the scene, an elected leader brazenly enjoying the very pleasures he’d denied the voters, the image of Christie sprawled in a deckchair captured so much that is wrong with the body politic.

Next time you want to sit on a beach that is closed to the entire world except you, you put your fat ass in a car and go to one that’s open to all your constituents

One week later, Christie was behind a radio microphone on WFAN. In its quest to replace departing lynchpin Mike Francesa, the most famous sportstalk station in America is trying out various candidates over the summer months. Bizarrely, the governor made the shortlist and, during a live phone-in, one caller veered away from the relentless chatter about Yankees and Mets to vent.

“Governor,” said Mike from Montclair, “next time you want to sit on a beach that is closed to the entire world except you, you put your fat ass in a car and go to one that’s open to all your constituents.”

Christie responded with a rant, labelling his critic, among other things, a communist and a bum. For the second time in a week, he was a viral sensation.

Last Friday night, the governor’s summer of anything but love took him to a baseball game in Milwaukee between the Brewers and the Chicago Cubs. A long, long way from the home state where he currently enjoys a 15 per cent approval rating, he discovered that his unpopularity had trailed him to a ballpark in the Midwest.

On the way back to his seat after getting food, several fans jeered and shouted insults in his direction. Eventually, unable to ignore the mockery, the governor stopped and decided to confront one heckler. Again, the visual was remarkable.

A corpulent figure, jealously balancing a basket of cheesy nachos lest any of them drop, the governor bent over until he was just inches from the face of Cubs supporter Brad Joseph. Then, he taunted him about being a big shot, while tapping the stranger’s knee rather menacingly with his own leg. That this unseemly confrontation played out with his security detail standing nearby, so much like goons flanking a mob boss putting the frighteners on, added a whole other layer to the drama. Which, of course, was captured on video for all of America to enjoy.

In a different era, it might be difficult to grasp this rather peculiar intersection between sports and politics but this is an age when the current occupant of the White House is a veteran WWE performer who spends his weekend’s shamelessly shilling for his own golf courses. Why wouldn’t one of the characters who somehow failed to beat him to the Republican nomination try to use his own national profile to audition for a post-politics career talking sports?

Even those who dislike Christie point out that he’s actually qualified and perhaps suited for the job of discussing bats and balls on air for hours each day. He has every fan’s rudimentary knowledge of sports, a ridiculously outsized ego, an endless capacity to bloviate, and a steadfast refusal to ever admit he’s wrong. In an arena where loudness is always prized over depth, he will be able to shout down callers as easily as he’s dismissed every attack on his lacklustre performance in charge of New Jersey.

Now, you may ask yourself why the sitting governor of a state with myriad problems is doing taking shifts at a radio station in the first place. Many New Jersey residents are wondering the same thing. Indeed, it has been pointed out that while Christie has been showcasing his wares on the airwaves, he’s been neglecting other work.

For instance, he’s chairman of the presidential commission investigating the country’s opioid crisis, a body that finally submitted its findings this week having already missed two earlier deadlines. Slightly more important stuff than parsing whether the Yankees can hold off the Red Sox in the American League East.

Christie has always been a mess of contradictions. He regularly boasts of having seen Bruce Springsteen live over 140 times even as his favourite singer denounces his every political position. Born and reared in the hinterland of Giants Stadium, he professes himself a Dallas Cowboys fan, the American equivalent of being from Clontarf but supporting the Kerry footballers. A long-suffering devotee of the New York Mets, he caught a foul ball at Citi Field recently and his reward was an impromptu chorus of boos from the bleachers. His own people turning on him.

For this 54-year-old, it could all have turned out very differently. Even after losing to Trump in the primaries and, inevitably, being insulted by him along the way, he was part of the incoming president’s transition team last winter, and, in some quarters, was mentioned as a future attorney-general.

A prestigious position but one that pays a lot less and involves far more work than fronting the highest-rated radio slot in New York. Not to mention taking daily flak from aggrieved baseball seam-heads may be a more attractive gig than the maelstrom of chaos that is Trumpworld. And one likely to last longer too.