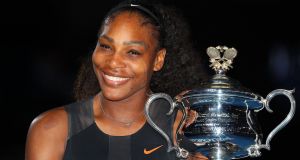 Serena Williams has issued a stirring call for black women to demand equal pay using a personal essay to highlight the financial disparity they suffer.

In the essay published by Fortune, Williams says that for every dollar earned by men in the United States, black women earn just 63 cents.

She draws on her own experiences to highlight unfair treatment black women are subject to in the workplace. “I’ve been disrespected by my male colleagues and – in the most painful times – I’ve been the subject of racist remarks on and off the tennis court,” she wrote.

Williams has repeatedly been the target of sexist and racist remarks by men in tennis. In 2016 the Indian Wells CEO Raymond Moore said women’s tennis was riding on the coat-tails of the men’s tour and that female players should “thank god” for Roger Federer and Rafael Nadal. In April the Romanian team captain Ilie Nastase made an apparently racist comment about Williams’s unborn baby and was heard calling her and Joanna Konta “fucking bitches”. Most recently, former champion John McEnroe said Williams would “be, like, 700 in the world” if she played on the men’s tour.

“Luckily I am blessed with an inner drive and a support system of family and friends that encourage me to move forward. But these injustices still hurt,” Williams writes.

Noting that she is “in the rare position to be financially successful beyond my imagination”, Williams says that if she wasn’t lucky enough to pick up a tennis racquet and break through she would be like the other 24 million black women facing wage disparities in the US.

“The cycles of poverty, discrimination and sexism are much, much harder to break than the record for Grand Slam titles,” she writes.

“For every black woman that rises through the ranks to a position of power, there are too many others who are still struggling.”

Williams writes that changing the status quo would take courage to push the issue into the spotlight and force employers to compensate female employees equally.

“We deserve equal pay for our mothers, our wives, our daughters, our nieces, friends, and colleagues – but mostly for ourselves.

“Black women: be fearless. Speak out for equal pay. Every time you do, you’re making it a little easier for a woman behind you. Let’s get back those 37 cents.”

1 Owen Doyle: Creeping professionalism of schools rugby a threat to the game
2 Officials and referees brace themselves as new GAA rules kick in
3 Niall Quinn happy to step into the breach at FAI
4 Cox calls for a more relaxed transfer regime in the GAA
5 McNamara outlines the scale of opportunity for Ireland’s U-20s
Real news has value SUBSCRIBE