Banbridge on right track after victory over Railway Union 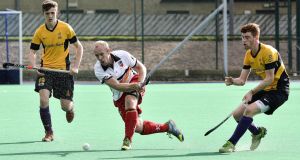 Banbridge’s Eugene Magee was on target in the 4-0 victory over Railway Union. Photograph: Rowland White/Presseye/Inpho

Banbridge produced an imperious performance against Railway Union to return to the top of the men’s EY Hockey League on a day when all of the top five switched places.

The Co Down side scored four times in the first 25 minutes at Park Avenue with Peter Brown, Dane Ward, Matthew Bell and Eugene Magee all weighing in with goals to give them a 4-0 win and the Christmas number one spot.

And there is little denying they look the best-equipped side to push on toward the title in the new year following a breathtaking couple of months.

They became the first Irish side to top a Euro Hockey League Round 1 group in October and are the only unbeaten side in the Irish league. They lead the way by a point but have a game in hand over Monkstown.

Similarly, some of their best young talents have also potential college scholarships on the table and so coach Mark Tumilty will be keen to match their talent with trophies this term.

They moved ahead of Monkstown who fell 4-2 to reigning champions Lisnagarvey in a cracking game in Glenageary. Andy Williamson’s double in the second half was the key contribution.

Cork C of I moved up a place to fourth thanks to their 2-1 win over Glenanne, Olympian John Jermyn netting the winning goal in the 52nd minute.

Three Rock Rovers dropped two places as they travelled north to bottom-placed Instonians only to find the Shaw’s Bridge pitch frozen and unplayable. The tie will be refixed for the new year.

1 Matt Williams: Six Nations must recognise the desire for revolution outside Europe
2 Aidan O’Brien targets historic eighth Epsom Derby win with strong hand
3 Monica Seles: The warrior queen who could have been the best ever
4 Séamus Power rockets into share of clubhouse lead in Detroit
5 Sport crosses its fingers yet again as ministerial merry-go-round gets another spin
Real news has value SUBSCRIBE