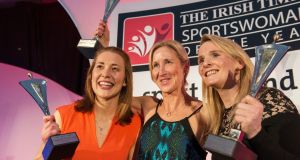 This roll of honour is proof that Ireland has no shortage of inspirational female athletes with the ability, passion and perseverance to compete at the highest level. We produce outstanding female sports stars. That is a fact.

There is, however, a long road to travel. The 2016 Sports and Sponsorship Sentiment Index (SSSI*), produced by PSG Sponsorship, has laid bare the stark differences between men and women when it comes to sport.

Despite the rhetoric, the good intentions, the marketing campaigns and investment, the gender gap remains wide. According to the fresh data released this week, both interest in sport and participation in organised sports is still a predominantly male thing.

If women aren’t talking the talk when it comes to sport, they definitely don’t seem to be walking the walk – and the differences in interest parallels participation.

The question then arises: can the gender gap be bridged, or do women not play organised sport simply because they have no interest in doing so? Or should we probe this further? Are there enough suitable sporting outlets for females? Do barriers to entry exist?

There are a couple of oft-cited reasons for the disparity. Women, particularly those with young families, simply have less free time than men, goes one. But research says different.

Women are more likely to exercise to keep fit and healthy (56 per cent) than men (43 per cent). They just chose to devote their time to fitness classes such as spinning, yoga and bootcamps, or individual pursuits such as walking and running, instead of organised team sports.

Participation in team sports tends to fall off for women when they leave school. Encouragingly, the Ladies Gaelic Football Association is piloting “Gaelic4Teens”, aimed at keeping teenage girls playing club football by providing a unique programme of activities to attract 15-17-year-old females.

Efforts such as this acknowledge that when it comes to participation in sport, males and females are not the same, and a different approach is needed. We should not be going about trying to “fix” the female participation problem by simply trying to replicate what works for men. Instead, we need to create new sporting outlets and come up with innovative ways to encourage women to play more sport.

A recent document from the English FA suggests that more girls would be interested in playing football if social media breaks were allowed, if they had nicely scented, colourful bibs, if referees used pink whistles, and if balls were lighter. This approach is not entirely helpful and the time for tokenism and cliches is over.

The bigger picture needs to be examined if Ireland is to produce more brilliant female sports stars. It may not be that women don’t want to play sport, but that the opportunities are still not there at all levels, for all ages.

A recent Sport for Business conference underlined the lack of opportunities and pointed to access as a major factor. It has also been argued that some sports need to be made more appealing for women to play, with everything from facilities to rule changes required.

Do the male-dominated governing bodies understand what works for women?

This week Patrick Donovan, the Minister of State for Tourism and Sport, caused a few raised eyebrows when he called for gender quotas on the boards of sports governing bodies. Whether you agree with him or not, Donovan has spotlighted a topic that is critically important to long-term policy in relation to sport, both by the State itself and individual sports bodies. It is worthy of debate.

It isn’t all doom and gloom. Sports that were historically designed and created by men for men, such as rugby, soccer and Gaelic games, now have strong female representation.

The Ladies Gaelic Football Association has 160,000 members. Camogie numbers more than 60,000, and the number of women who play soccer is now 23,000. Basketball Ireland has nearly 14,000 female members.

Interestingly, “newer” sports such as triathlon have large female numbers. The amazing grassroots phenomenon of parkrun has a 53 per cent female participation rate of all ages, and is in 55 locations throughout Ireland.

Major commercial sponsors have now seen the huge benefit of sponsoring female sports stars, sports teams and leagues, and I expect more sponsorship revenue to follow the likes of Liberty, Vhi, AON, Littlewoods, AIG, Continental Tyres and, especially, Lidl. This extra investment and creation of new female brand ambassadors can only be a positive thing.

A long road has been travelled but there is a good distance yet to travel.More promotion is needed. More investment required. More role models. More opportunities to play.

The alternative is to accept that women just aren’t as sporty as men. If this is the mindset, we will never see the gender gap narrow.

*The SSSI is a comprehensive 1,000-person, nationally representative survey with quotas imposed on gender, region, age and social class. The research was carried out by PSG Sponsorship and examines Irish attitudes towards sport, sporting heroes, levels of participation, and the impact of sport on the Irish psyche. This is the seventh year of the research.