India pile on runs and misery as England toil in Chennai 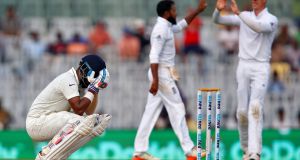 Indian opening batsman reacts after his dismissal for 199 in the 5th Test against England at the M A Chidambaram Stadium in Chennai. Photograph: Danish Siddiqui/Reuters

What a lovely day to be the third umpire. This occupation has been described by one who knows as “hours of boredom punctuated by moments of panic”. But for most of this lazy Sunday in Chennai it was not such a taxing job.

Until 4.36pm umpire Bruce Oxenford could recline happily up in his eyrie with a cup of tea, some tiffin, the crossword perhaps and without any tiresome interruptions. He was not called upon to make a single decision until there was a desperate review from Moeen Ali followed by a slightly more plausible one in the gloaming from Adil Rashid, which was also swiftly denied. Otherwise there was nothing for Oxenford to do which gives an idea of how infrequently the ball missed the middle of the bat on the third day of a run-soaked Test match.

Such tranquility has been a rare luxury for the third umpire throughout England’s winter tours of Bangladesh and India.

Usually his room has been a hive of tense activity often leading to sentences beginning with the words, “Sorry, Kumar mate, but . . . ” But here Oxenford could have spent the day enhancing the features of the protective shield that he has recently designed to guard against fierce straight drives when he is standing out in the middle. The only gadget he required until the final half-hour was a kettle.

Not that the cricket was dull. But it was predictable. India scored lots of runs, the sole surprise being that Virat Kohli only scored 15 of them and England’s bowlers sweated buckets in a noble, resigned sort of way.

KL Rahul hit a wonderfully fluent century, the fourth and the highest of his career but his first in India. But for an aberration against Rashid just before the close when he sliced a very wide leg-break to cover, it would have been a double century, the opener departing crestfallen for 199. Parthiv Patel scurried to 71 and Karun Nair eagerly registered his best Test score so far, finishing the day unbeaten on 71. Kohli and Cheteshwar Pujara were finally dismissed cheaply but the peripheral players came good, which will satisfy an Indian camp that may now contemplate “doing a Mumbai” in this match.

Alastair Cook decided to begin with Liam Dawson alongside Stuart Broad, which at least had the virtue of giving the debutant left-arm spinner an early baptism as a Test bowler, after propelling his solitary maiden over on Saturday night.

Dawson was on target but that did not disturb Rahul, who soon darted down the pitch to drive the ball over the long-off boundary; in the next over he drove the same distance to long-on; two respectable deliveries, two audacious shots.

Thereafter all was serenity for India’s makeshift opening pair. Patel scuttled eagerly and cheerfully like an understudy suddenly elevated to the West End stage. In fact since Patel came in to the side he has performed rather better than indisposed Wriddhiman Saha.

However Patel could not take full toll. Maybe he was too ambitious against Moeen when an attempted drive sliced gently to cover. Rahul, by contrast, stayed for over six hours, sensing his golden opportunity to cement a place in the side.

Currently there are some notable absentees, Rohit Sharma, Ajinkja Rahane and Shikhar Dhawan, but an innings of this proportion surely guarantees his place when India play their next Test – against Bangladesh.

Rahul is a delight to watch, a willowy figure, who needs no encouragement to play his shots and he has plenty of them: wristy drives, lofted drives, deft cuts that often escaped third man and effortless flicks of his toes. He is a 21st century opening batsman, who does not like to hang around.

Even so a century from Rahul was not quite top of the wish list of a substantial Sunday crowd. After Pujara was caught at slip off Ben Stokes for 16 there was a rapturous reception for Kohli, who has inherited the mini-deity status that was Sachin Tendulkar’s for a decade or more.

Only the edges of the seats were occupied as Kohli settled in, alert and feline as he dabbed hostile deliveries from Stokes towards the third man boundary. But then a stunned silence overwhelmed the stadium. Broad, in the middle of a miserly spell, opted to go around the wicket and there was a gasp of disbelief as the ball was driven in the air straight to Keaton Jennings at short-extra cover. England celebrated gleefully but there would be little else to bring a smile to their faces at the end of a gruelling day, except that its conclusion took them 24 hours nearer the flight home.

Rahul briefly reined himself in after Kohli’s departure and Nair took his time to settle in on the most benign batting surface encountered by England this winter. One chance was spurned when Cook at slip failed to hold on to a tricky catch from the edge of Nair’s bat off Jake Ball. Soon after Cook removed himself from the slips, possibly out of self-disgust, more likely because of a bruised finger. Thereafter the partnership flourished easily against a bowling attack that looked increasingly toothless.

If Ball was the unluckiest England bowler Broad was the canniest. Of the spinners Dawson was the most economical and the most used, which was an achievement in itself, but he is still searching for that first wicket; Rashid, despite gaining his 23rd victim of the series, was below his best.

For all of the bowlers this was a trial although the way the game is going they may not be required to do much bowling in an Indian second innings. Once again it looks as if the height of England’s aspirations will be for their batsmen to save the match.