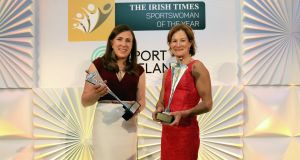 The ‘Breeze Queen.’ It was Annalise Murphy’s unwanted middle name for a full four years. It was the slight on her medal winning ability that year after year following the London Games dragged her down.

Everywhere she turned in the years and months leading into Rio she was confronted with the ‘Breeze Queen.’ What was originally an observation had evolved into an accusation that she could only go fast when the wind was up.

Picking up her Irish Times/Sport Ireland Sports Woman of the Year Award on Friday was another chance for the 26-year-old to breathe freely and reinforce one of the basic concepts of sport, that you don’t give up, that you believe in yourself.

But there were times when Murphy stopped believing, stopped racing fast and was ravaged by self doubt.

“I was told the conditions in Rio didn’t really suit me and that I shouldn’t even go,” said the Olympic silver medal winner. “Now I feel like I have spent the last four years talking about Rio. There were a lot of times when people told me to give up or I thought about giving up.

“There were times when I came home and said I just don’t know if I can keep on doing it. Then I’d get up the next morning and go training.”

Murphy’s story is about strength of character and team work. A few months before Rio her form had dipped. Her friend, the New Zealander Sara Wither, was one place short of Rio qualification and was not picked to travel by her sailing association. Murphy asked her to come to Rio as her training partner. The Kiwi said yes.

“She had been beating me in every single event in the last three years,” says Murphy. “But it was one of my peers telling me I am doing the right things. That was something that made a huge difference. Up to that point I thought they were so much better than me. That started to increase my confidence.

“It sounds very stupid but we called ourselves the egg team. I was an egg but I needed to be a hardboiled egg because if I made one small mistake I would go into a complete meltdown about it.”

Annalise’s mother Cathy, an Olympic sailor in Seoul 1988, observed that Sara was the right thing at the right time. She was, says Cathy “the lime in the Gin and Tonic.”

Murphy’s medal was the first won by sailing in 36 years. In that respect it has huge ramifications for the sport and for her funding looking towards the World Championships next summer in the Netherlands and the Tokyo Olympics in four years time.

“The silver medal is hugely important. It is proof of concept for us,” says High Performance Director James O’Callaghan.

“It is breaking through the glass ceiling and says to people ‘hey we can do this. Kids will see she has won a medal and that it is possible.”

For Murphy the future is honing in on a World Championship win, which she has never had. But she faces into the next six months armed with the intelligence of Olympic success, better equipped for the troughs of competitive sport.

Not just an illustration of character, her medal is also a celebration of work ethic. In learning the nuances and characteristics of the Olympic race courses in Guanabara Bay, how the tides worked and how the winds bounced off the Sugarloaf Mountain, Murphy spent over 100 days on the water prior to Rio.

“I felt like I was the best prepared Leaving Cert student in the world,” she says. “I spent 128 days on the water before the Olympics and 160 days in total in Rio. Every day I was out sailing I drew out coarse maps I wrote down what the wind was doing tide patterns. I’d a massive folder of information as to what was happening on the race courses.”

Rio is past. But it has given her an appetite. She knows she belongs. She understands what it takes to reach the podium. And more importantly she wants it.

“The Tokyo Olympics are looking incredible,” she says. “I think it is an Olympics that I could excel at. Tokyo is supposed to be a windy Olympics so at least I won’t have the next four years of people saying oh it’s going to be light you shouldn’t be going to the Olympics.

1 In turmoil on and off the pitch: Where did it all go wrong for Barcelona?
2 Limerick’s Shane Dowling forced to retire at 27
3 The Best Of Times: Harrington stares down Garcia in epic Claret Jug battle at Carnoustie
4 Rugby impasse continues as no deal reached in fourth round of IRFU salary talks
5 Coronavirus has turned Viktor Hovland into long drive champion
Real news has value SUBSCRIBE