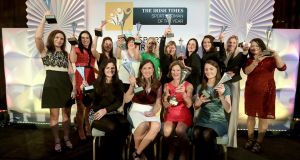 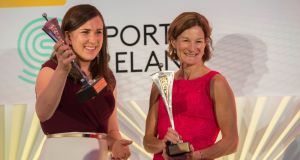 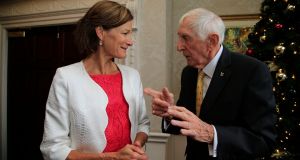 Pictured are Sonia O’Sullivan – winner of the outstanding achievement award – and Ronnie Delany at The Irish Times/Sport Ireland Sportswoman of the Year awards for 2016. Photo: Nick Bradshaw/The Irish Times

Olympic silver medallist Annalise Murphy has been crowned The Irish Times Sport Ireland Sportswoman of the Year for 2016.

The 26-year-old claimed silver in the Women’s Laser Radial Class following a pulsating medal race at Guanabara Bay in Rio in August.

Murphy, from Rathfarnham in Dublin, displayed tremendous courage and skill to bounce back from the disappointment of a 4th place finish at the London Olympics in 2012.

“It’s amazing, this time four years ago I had just finished fourth and it was the hardest day of my life, but I said I was going to come back and try to get a medal. So to actually go and do it, it’s incredible” Murphy said shortly after her win.

Her success was Ireland’s first medal in sailing since David Wilkins and James Wilkinson won silver in the Flying Dutchman class in Moscow back in 1980.

Murphy, who became the first woman to win the Irish National Championships in 2010 and won Gold at the 2013 European Sailing Championship, was the Sportswoman of the Month for August.

This is the 13th year of the awards and the sailor was among 16 monthly award winners – there were multiple winners on several occasions – nominated for the 2016 title.

One of Ireland’s greatest ever runners, Sonia O’Sullivan, who won silver at the Sydney Olympics in 2000, was presented with the Outstanding Contribution to Women’s Sport 2016 Award.

The 47-year-old from Cobh, established herself as one of the world’s top middle distance runners during the 90’s and competed in four Olympics between 1992 and 2004.

O’Sullivan, who lives in Melbourne, with her husband Nic Bideau and their two teenage girls, retired at the end of the 2007 season.

Guest of honour Tánaiste and Minister for Justice, Frances Fitzgerald congratulated all the award winners on their magnificent sporting achievements and wished them continued success into the future.

“Every woman here today is a role model and an inspiration,” she said.

“And I know they will continue to be role models, not just throughout their sporting careers, but afterwards, hammering home the message that activity is good.

“That team sports teach us to rely on others and be worthy of the reliance of others. That solo sports require a fierce continued dedication. That activity is its own reward. All of those things are important to women, and it is marvellous that The Irish Times has created such a simple, elegant way of celebrating success and sharing that success.

The Sports Editor of The Irish Times, Malachy Logan, described the nominees as a group of extraordinary people who deserve all the kudos that come their way. He said there needed to be positive discrimination in the media towards the coverage of women’s sports.

“The impact they make on women’s sport is immense and the upward curve in participation and interest is primarily down to them. We owe a big debt to all of them, as well as their coaches, their families and partners and particularly Sport Ireland for nurturing their talents from a young age and funding many of them in their full time careers as athletes.”

The CEO of Sport Ireland John Treacy said the body was delighted to again partner with The Irish Times for the 2016 Sportswoman of the Year Awards.

“This year has been a momentous one for Ireland’s sportswomen with the Olympics and Paralympics in particular showcasing the very best of Irish talent on the world stage, while performances in World and European championships and achievements in national events show that Irish athletes continue to achieve at the very highest level. I would like to congratulate all of today’s award recipients and thank each one of you for being such fine ambassadors for both your sport and your country in 2016.”

The Minister of State for Tourism and Sport Patrick O’Donovan congratulated Sport Ireland and The Irish Times for staging the awards which he said recognised the incredible contribution of Irish women in sport.

“Ireland’s sportswomen have once again made a hugely significant contribution to an excellent year for Irish sport and given us many wonderful memories over the last twelve months. Their continued success serves to enhance Ireland’s reputation abroad and to boost morale here at home.

“I would like to congratulate today’s winners and pay tribute to all of the coaches and support teams who have helped put Ireland on the sporting map in 2016.”

PREVIOUS SPORTSWOMEN OF THE YEAR

December 2015: Fionnuala McCormack (Athletics). The 2011 and 2012 European Cross Country gold medallist just missed out on another individual medal in the 2015 race, finishing fourth, but led the Irish team, completed by Lizzie Lee, Caroline Crowley and Ciara Durkan, to bronze for the second successive year. She went on to register a personal best to finish 20th in the Olympic marathon, before taking fifth in last Sunday’s European Cross Country Championships.

January: Áine McKenna (Basketball). The Kerry woman won the Most Valuable Player award for her performance in the National Cup final when she captained Glanmire club Team Montenotte in their outstanding 96-64 victory over Killester. That win gave them a three-in-a-row and a record sixth success in the competition, McKenna featuring in five of their triumphs.

February: Ciara Mageean (Athletics). After a hugely promising junior career, the Portaferry, Co Down runner was blighted with injuries, last representing Ireland at the 2012 European Championships. But she came back in some style in 2016, breaking the Irish 1,500m and mile indoor records in February, before going on to win bronze in the 1,500m at the European Championships in July. She reached the semi-finals in the same event in Rio.

March: Nina Carberry (Horse Racing). Our 2011 Sportswoman of the Year won the Foxhunter Chase at Cheltenham, on the Enda Bolger-trained On The Fringe, for the second year running, making it three victories in the race in all, and six career victories at The Festival. Carberry recently announced that she will miss the rest of the 2016/17 National Hunt season - she is expecting her first child.

April: Ellis O’Reilly (Gymnastics). The 18-year-old became the first woman to represent Ireland in gymnastics at the Olympic Games. The Londoner, whose Armagh-born grandfather qualified her for Ireland, finished in the top half of the field at the 2015 World Championships in Glasgow to win a place at April’s Olympic Test Event in Rio, and from there she earned her place in the Games.

May: Kellie Harrington (Boxing). When the Dubliner set off for Kazakhstan back in May to compete in her first ever World Championships she was unseeded and had little international experience behind her. When she returned home she had a silver medal around her neck. Harrington beat opponents from Lithuania, Germany, the home favourite and a Canadian before losing to China’s Asian champion Wenlu Yang in the light-welterweight final.

June: Leona Maguire, Olivia Mehaffey and Maria Dunne (Golf). We’ve had plenty of double monthly awards over the years but June produced our very first treble, the contributions of the Irish members of the Curtis Cup team that reclaimed the trophy from the United States at Dun Laoghaire Golf Club, only Britain and Ireland’s second success in the competition in a decade, making it impossible to separate them..

July: Jenny Egan (Canoeing). The disappointment of narrowly missing out on Olympic qualification for the second Games running didn’t stop Egan from having a hugely successful summer, the highlights coming in Portugal and the Czech Republic where she won gold and silver World Cup medals, making her the only Irish canoeist, male or female, to medal in World Cup events.

August: Annalise Murphy (Sailing). It might have taken four years, but the pain of missing out on a medal at London 2012 was banished by the Dubliner on Guanabara Bay in Rio when she won silver after the final race of the women’s Laser Radial. It was Ireland’s first medal in sailing since David Wilkins and James Wilkinson took silver in the Flying Dutchman class in Moscow back in 1980.

September: Katie-George Dunlevy and Eve McCrystal (Cycling). Dunlevy and her pilot McCrystal won gold in the Road Time Trial and silver in the Road Race at the Paralympics, contributing handsomely to the Irish tally of four gold, four silver and three bronze - three medals came in the discus, from Cork women Noelle Lenihan, Orla Barry and Niamh McCarthy, and another in swimming from Dubliner Ellen Keane.

October: Laura Graham (Athletics). The 30-year-old from Kilkeel in Co Down only made her marathon debut in Belfast six years ago but she was the first Irish woman home in this year’s Dublin marathon, just her sixth run at the distance, knocking six minutes off her previous best, just three minutes off the qualifying time for the 2017 World Championships.

November: Denise Gaule (Camogie) and Brid Stack (Gaelic football). Both players had already enjoyed a memorable year, but it was capped in November by them being chosen by their peers as the Camogie and Gaelic football Players of the Year. Gaule made an outstanding contribution to Kilkenny winning their first Camogie All-Ireland senior title in 22 years, and Stack did the same in Cork’s six-in-a-row and their 11th title in 12 years.