Jason Quigley in a hurry for bigger challenges after latest KO 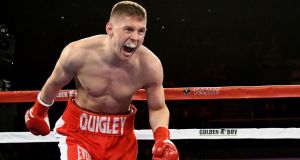 The last time we saw Jason Quigley as an amateur it was contesting the World Championships final in Kazakhstan in 2013. Darren O’Neill had finally moved up a weight division clearing the path for the younger man.

Even at that promising stage, the Donegal middleweight, who had already been crowned European champion earlier in 2013, was caught between making a run for the Rio Olympics and the professional ranks. He can assume now that the right decision was made.

Trained by his father Conor in Finn Valley, his ultimate destiny was always to turn professional, and when Golden Boy Promotions with Oscar De La Hoya shinning his millionaire dollar smile came calling, Quigley’s mind was made up.

Now he is an unbeaten middleweight on the cusp of stepping up to another level and facing opponents for world titles in 2017. An Irish ‘transplant’ they call him in the US but Quigley is on the rise and transplant or not is as deeply ingrained in Ballybofey as you can get.

His disposal of Jorge Melendez of Puerto Rico in Los Angeles on Saturday night was fast and furious. It was the performance of a boxer who is in a hurry. Biding his time and learning the game, the next 12 months are expected to be his breakthrough year. That at least is how he sees 2017.

With a pre-fight unbeaten record of 11-0 – nine of those through knockouts – Quigley came blazing out of his corner at the starting bell to get straight to work on Melendez with power punches that immediately began to cause his opponent difficulty.

His opponent came into the bout, which was on the undercard of 51-year-old Bernard Hopkins’s last fight, with a 28-8-1 record but with 26 KOs. Melendez could bang.

Within seconds of it beginning inevitability crept into the bout as Quigley landed several right hooks to claim his first knockdown of the evening. Melendez got to his feet. But Quigley knocked him down again and at that point his 12th professional bout was effectively over.

Melendez gave it one more effort but by the look of his corner, there wasn’t too much enthusiasm about the fight going much further. They finally threw in the towel for him at 2:24 of the first round.

It was Quigley’s first fight in seven months and it marked another milestone in what is turning into being a storied career in California.

What it means for the 25-year-old, who had a taste of the big-time in Las Vegas when he appeared on the Saul ‘Canelo’ Alvarez-Amir Khan undercard, is a yearning for De La Hoya to fix him some more meaningful fights.

By any stretch he has had a well paced introduction into a highly competitive weight division. From July 2014, when he had his first bout against Howard Reece in Las Vegas, he has averaged less than six a year.

Michael Conlan will shortly be joining Quigley in California under US coach Manny Robles and Quigley was one of many who chimed in for Conlan, when the Belfast bantamweight was controversially beaten in Rio.

“It happens every Olympic cycle, but people forget about it because of the four-year gap between each Games,” Quigley told the Donegal Daily in August. “It was a disgusting decision, and it’s time Conlan joined me in the pro ranks now! Amateur boxing is corrupt!”

Conlan has listened and will make the move in January with his family, partner Shauna and daughter Luisne. The two will soldier along in the US with John Joe Nevin, who is in Philadelphia. Unlike Quigley, Conlan, who begins his professional career on St Patrick’s weekend in New York, has negotiated with his promoters, Top Rank, for one fight a year in Ireland.

Katie Taylor is also spending much of her time in the US training under the watchful eye of Ross Enamait, while Paddy Barnes has opted for Mathew Macklin’s gym in Spain.

‘El Animal’ the South American boxers call the notoriously hard trainer, Quigley, in the gym. For the fair haired, soft spoken Irishman, Melendez on Saturday was supposed to have been his toughest opponent so far. Perhaps they know something that we don’t moving towards a career defining 2017.