Calls for more women in leadership roles in Irish sport 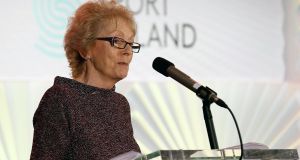 Frances Kavanagh of Sport Ireland at the Irish Times/Sport Ireland Sportswoman Of The Year Awards at the Shelbourne Hotel, Dublin on Friday. Photograph: Donall Farmer/Inpho

Not many awards lunches end with everyone feeling like a winner, which was the point made by Tánaiste and Minister for Justice Frances Fitzgerald, just before the announcement of The Irish Times/Sport Ireland Sportswoman of the Year for 2016.

Because while sailor Annalise Murphy was named outright winner, all 12 monthly winners – 16 nominees in total – made an equal impression on the ever-widening landscape of women’s sport during the year.

“The best thing about these awards is the fact they are run over a 12-month period,” said Fitzgerald, “with the judges selecting the winner each month for her ability to excel in sport. That system, with its constant, recurring reminder, is great. It keeps women in sport at the front of the mind, and recognises achievement, rather than uniqueness, and that’s very important.

“So it’s really marvellous that The Irish Times, and Sport Ireland, have created such a simple, elegant way of celebrating success, and sharing the implications of that success. It’s such an important initiative, and to have sustained it for so long.

“I would say the benefit of participation in sport, for women and girls, extends beyond the physical, of course, to include the mental and social wellbeing. We know how empowering sport is, and the leadership and teamwork that it develops. And they are all highly transferable.”

“And people talk about barriers, whether that’s age, gender, disability, role models, I also believe it’s actually us as women who create those barriers in our own head, say maybe we’re not good enough. Do you know what? Of course you are, and of course you can be.”

The Minister of State for Tourism and Sport Patrick O’Donovan, while congratulating Sport Ireland and The Irish Times for staging the awards, also took the opportunity to reiterate his recent proposal that women make up at least 30 per cent of the boards of Irish sporting bodies.

“When I went into this role, one of the things that preoccupied me was the concept of making sure that young Irish women don’t fall off in terms of sports participation,” he said. “So I threw a kick at the table, the cat among the pigeons, because I believe now is the time for having a national conversation about where women in sport are.

“This is a challenge, and long overdue in Irish sport. I believe in a meritocracy, but a meritocracy that has glaring omissions like Irish sport at the moment needs that kick in the table. And I hope over the next couple of months that we can work together and achieve that, because I do want to see young Irish women aspire to being role models off the field as much as on the field.”

Afterwards, however, following a separate meeting with around 50 sporting bodies on the issue, Minister for Transport, Tourism and Sport Shane Ross said that “punitive measures would not assist us in achieving this goal”.

Ross agreed to set up a Sports Leadership Group as a way to continue an open dialogue with the sector.

“I am delighted with the response from NGBs who suggested several ways of increasing the representation of women in leadership roles in sport. There was a general consensus at the meeting that punitive measures would not assist us in achieving this goal. I look forward to further engagement.”

“Gains are made each year in sponsorship, public awareness and participation levels for girls and women,” said Logan, “but there is still a hill to climb. For our own part, in the media, it is my view that there needs to be positive discrimination. That’s the reason why we in The Irish Times started dedicated women’s coverage every week this time last year.

“Any scepticism that it wouldn’t work was quickly answered by the hugely positive response we got online and in print. It could only have happened because the sportswomen we featured over the year have wonderful stories to tell and show nothing of the cynicism and reluctance to engage of their male counterparts.”