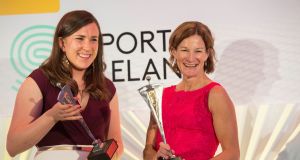 No introduction required, not when Sonia O’Sullivan steps up to receive the Outstanding Contribution to Women’s Sport Award, and she’s not done contributing yet – nor done inspiring either.

“Ah, just about an hour a day,” says O’Sullivan, to some mild amusement, when asked if she still ran, almost 10 years after retiring with 14 major championship medals, including that cherished Olympic silver from Sydney 2000.

“I wouldn’t like to tell how far I go, because it’s probably not enough. I try to do something for an hour a day. I’m paying for it a bit now, with loads of aches of pains. There’s not a pain free run these days.

“These days I also reflect on something my physio Ger Hartmann always said when I had an injuries down through the years, ‘don’t think about the things you can’t do, think about what you can do’. And no matter what crops up, there’s always something that you can do.

“And maybe to try show other people as well. There’s 24 hours in the day, and if you wake up early in the morning, particularly if you’ve just come off a flight from Australia, you’re waiting for it to get bright. But one of the things to do is to get out an about.”

Her championship record, starting with World Student Games gold in 1991, and finishing with European team silver with the Irish cross country team in 2003, will forever speak for itself, and in ways she does think back now and wonder how she made it all possible.

“Sometimes I do look at what I’ve done, and in a way can’t believe it. I look through my training diaries and think ‘how was I able to do that’. I would keep track of things, most of the time. But when it came to September and October I would already be thinking about the following year, about being a little bit better, a bit faster.”

She’s also more positive now than ever about the future of Irish sport, and the small role these The Irish Times/Sport Ireland Sportswoman awards play in that: “It’s great for the young kids in school, starting out, to have so many women role models, in so many different sports. Not just athletics and swimming. There is something for everybody, and you just have to find what you enjoy, what you’re good it, and find that passion, and really make it part of your life.”

Hatton roars clear in Abu Dhabi as McIlroy’s game deserts him in the dessert 15:31
Manchester City’s Kevin De Bruyne ruled out for up to six weeks 14:33
Angelo Mathews stands up to England attack as Sri Lanka hold firm 13:09
Conor McGregor feels like he’s ‘only starting’ in UFC career 13:02
TG4 to show matches and highlights from AFLW 12:40