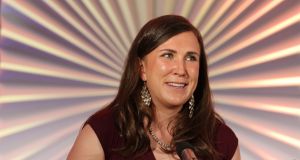 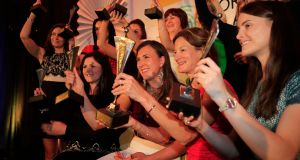 Annalise Murphy along with the monthly winners at The Irish Times/Sport Ireland Sportswoman of the Year awards. Photo: Nick Bradshaw/The Irish Times

Four months after the Olympic Games, Annalise Murphy’s year continued to bring her success when the 26-year-old was crowned the Irish Times / Sport Ireland Sportswoman of the Year.

Murphy captured national attention in Rio when she showed courage and determination to come back from a crushing fourth place in London 2012 to win an Olympic silver medal – the first sailing medal Ireland has won since David Wilkins and James Wilkinson’s silver in the Flying Dutchman class in Moscow in 1980.

Murphy also had to pick herself up from paralysing self doubt just months before the event in Rio began last August before battling her way through the six day event for a deserved podium place.

“I’ve won five monthly awards. The first one was 2009,” said the overall winner. “It’s an incredible day out to get to chat with the other women that have won awards. It’s really great to meet all these other sportswomen from different sports. I really love it, it’s a pretty special day.”

Frances Fitzgerald, Tánaiste and Minister for Justice and Equality, welcomed the monthly winners and spoke of the importance of women participating in sport. She also pointed to achieving athletes like Murphy and Sonia O’Sullivan as having a central role in inspiring women and especially younger girls to believe in themselves.

“Sport often gives girls a recognition of their talent at an early stage,” said Ms Fitzgerald. “This is a topic and interest I’ve had for a while – the visibility of women in sport.”

The Dun Laoghaire sailor, who won her Olympic medal in the Laser Radial class, overcame competition from 11 other monthly winners including boxing’s Kellie Harrington who won World Championship silver. Harrington has now moved to the 60kg division, which was vacated by Katie Taylor when she turned professional, and means Harrington can strike out for Tokyo as it is an Olympic category.

Runner Ciara Mageen was also a monthly winner with Nina Carberry from horseracing and Leona Maguire, Olivia Mehaffey and Maria Dunne for their role in reclaiming the Curtis Cup from America last June at Dun Laoghaire Golf Club.

Katie-George Dunlevy and Eve McCrystal, who won the gold medal in the Road Time Trial and sliver in the Road Race at the Rio Paralympics as well as Denise Gaule, for her contribution for helping Kilkenny winning their first camogie All Ireland senior title in 22 years were also in contention for the overall award.

Brid Stack, part of Cork’s six-in-a-row football team, was a monthly winner along with Gaule in November.

“You have made an immense contribution to Irish sport,” said Sport Ireland’s Frances Kavanagh to the winners. “Despite all these fine achievements there is still a long way to go. I think as women we create our own barriers. We say in our head ‘oh we are not good enough’ but we are. There are no barriers. We just need to get out and do it.”

It is the 12th year of the awards with Sport Ireland and The Irish Times partners in the scheme since horseracing’s Cathy Gannon first won it in 2004. The awards, devised to celebrate the talent, ability and achievement of women athletes, have filled a space that had been sorely lacking in the Irish sporting calendar.

Boxer Katie Taylor is a four-time winner and is the only athlete so far to have won it more than once.

Sonia O’Sullivan, an inspiration for Murphy when she was a 10-year-old watching the Olympics on television, was also honoured with The Outstanding Contribution to Women’s Sport Award.

“Being from Ireland we don’t have many medal winners,” said Murphy. “Sonia was the incredible athlete and a major celebrity in my eyes as well as an Olympic medal winner.

“Getting to see Katie (Taylor) as well with her gold medal after London . . . I was there and feeling pretty sorry for myself. Like it was ‘I want what she has. I want a medal as well.’

“You know the British sailing budget for the next four years came out. It’s over 26 million and that’s pounds, all for the sailing team alone. That’s what we are competing against. But we have also shown we can win medals without all that funding.”

“Since Rio there has been a big change,” added Murphy. “Some bits are great, some are overwhelming. You can’t prepare yourself for something like this. It’s amazing, this time four years ago I had just finished fourth and it was the hardest day of my life.”