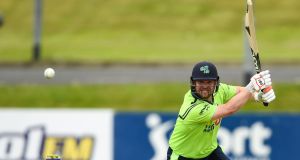 Paul Stirling made 95 from just 47 deliveries in Ireland’s four-run victory over the West Indies in Grenada.

Ireland captain Andrew Balbirnie wants his side to push on and claim a historic series victory over the West Indies after they put the T20 world champions to the sword in a thrilling four-run victory in the first game of the three-match series in Grenada on Wednesday.

With back-to-back games to come at the weekend in St Kitts, Balbirnie believes Ireland need to keep the pedal down after they made a perfect start to a year in which they will play in the T20 World Cup in Australia in the autumn.

Paul Stirling and Kevin O’Brien were at their destructive best as they put on 154 for the first wicket, including a record 93 runs in the six powerplay overs, beating the 91 that their opponents made against Bangladesh in 2018.

Dwayne Bravo made the breakthrough with the third ball of the 13th over, bowling Kevin O’Brien after he made 48 from 32 balls, while the key wicket of Stirling went in the next over when he got under a delivery from leg-spinner Hayden Walsh and holed out to Evin Lewis at deep midwicket.

It ended the carnage that had been suffered by the home attack, with Stirling having hit eight sixes and six fours in his innings of 95 off just 47 deliveries.

Ireland struggled through the next few overs, losing four wickets for just 13 runs in four overs before Gareth Delaney (19) and Gary Wilson (12) helped Ireland past the 200-mark, eventually ending up on 208 for seven.

A hefty target, but a talented West Indies side with former Ireland coach Phil Simmons back in charge got off to a flying start as Ireland’s attack disappeared to all parts of the National Cricket Stadium.

Outstanding in the ODI series, Lewis led from the front with a quickfire half-century, while skipper Kieron Pollard looked at his destructive best until he was beaten by Simi Singh’s brilliantly disguised leg-break.

Ireland looked in a good position after George Dockrell recovered from some earlier punishment when conceding just two runs in the 17th over to leave the West Indies still requiring 43 runs to win from 18 deliveries.

A disastrous over from Barry McCarthy saw 27 of those chalked off as three sixes and two fours were scored but Craig Young took the wicket of the dangerous Nicholas Pooran for 26 in the penultimate over where he conceded just three runs to leave 13 required .

Ireland’s final-over hero bowling hero came in the shape of 20-year-old left-arm seamer Josh Little, who took the wicket of Sherfane Rutherford with the first ball, was hit for six by Bravo with the second before getting the all-rounder with the penultimate delivery of the match.

Needing four runs to set up a super over or six to win, Little’s final delivery beat the bat and lodged safely in wicketkeeper Gary Wilson’s gloves to secure the victory.

It provided Balbirnie with a first win in just his fourth game as captain and a huge relief after the painful defeat in the second ODI in Barbados.

Now he wants his side to finish the job when the sides relocate to St Kitts for the first of two games on Saturday (10pm Irish time.

“That’s the message I’m going to say to the group, it’s great to get a win obviously but you want to win a series and make history so if we can do that in the next two games, we’ll go home very happy,” said Balbirnie. “Obviously everyone is ecstatic inside, we came so close in that second ODI and it maybe affected us a bit in our third ODI. So to show the bottle and come out against one of the top teams in T20 cricket and get a win was great for the vibe of the team.”

Balbirnie praised his side’s performance in the field, where some brilliant catches were held, none more so than Dockrell’s one for the first wicket of Lendl Simmons, but kept his highest praise for Stirling’s batting.

“It was probably as good as I’ve ever seen him bat in T20 cricket, he’s a world-class player at this level, he’s played all around the world, he’s such an important player for us in all forms of cricket.

“He leads from the front and he did that today, himself and Kevie set that platform up for us to be able to get such a good score.”